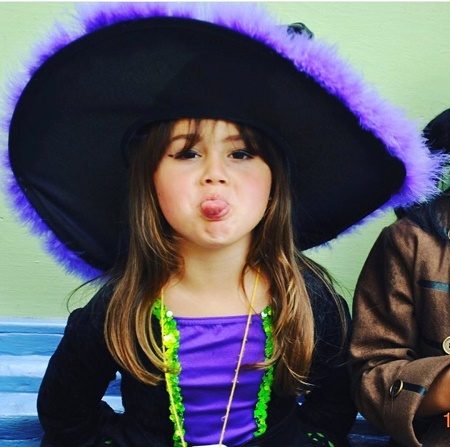 Jolie Dodd is an American celebrity child who has gained fame since her birth. She is popular as the single daughter of American TV personality and reality TV star, Kelly Dodd, and her ex-husband, Michael J. Dodd, a well-known businessman.

She was born in 2006 in the United States of America. As per her citizenship, she is American and belongs to the white ethnicity. Further, she is the granddaughter of Frank Meza. Let's explore more about her in the following section.

Jolie Dodd, who is 13, and will be turning 14 next month, has no boyfriend at the moment. And even having a boyfriend at such a young age is not reasonable. So, she's focused on her studies and has just completed her 8th grade.

During an the coronavirus (COVID-19) outbreak, she has been spending some time with her grandmother in California. Since, her mother Kelly moved to New York City to be with her fiance, Rick Leventhal. "Thanks, Mom for watching Jolie while I was in new york!! My loves," said The Bravo in IG wall.

Her Parents' Were Married for 11 Years

Yes, her divorced parents' Kelly and Michale were in a marital relationship for about 11 years. The exes spouses tied the knot in the year 2006 at a private ceremony wedding. However, there are no further details available regarding their first met and dating history to the press.

During their decade of the union, they welcomed one daughter whose name is Jolie Dodd. Sadly, things went worse between them and they parted their ways in September of  2017.  Nevertheless, in 2012, the reality television star had previously filed for Michael's divorce.

In February 2018, the couple who had been married for over a decade finalized their divorce. “I’m done with our marriage. It’s just a case where two people can’t get along. It’s best if we went our separate ways and concentrate on our daughter" she told.

Yes, the mother of one, Kelly, 44, is set to become a bride for the second time. As she is beyond excited for her future with Rick Leventhal, a Fox News correspondent. On November 13, 2019, Dodd announced their engagement news by showing off their engagement ring through Instagram by posting the holding picture of two.

" I can’t believe I just got engaged !!. She wrote on the post:"@rickleventhal you are my Prince and my dream come true!!!". Rick said this amazing speech about their love and then got down on one knee and pulled out this giant ring", she said on People.

Further, the newly engaged couple are planning to tie the knot on Oct. 10, 2020.

How Rich is Jolie Dodd?

Meanwhile, the 13-year-old Jolie Dodd is enjoying a luxurious lifestyle being the richest celebrity infant. However, when it comes to her mother, Kelly Todd's net worth, it is around $10 million as of early June 2020. She has amassed that fortune from her acting career.

Further, Kelly reportdely brings home salary from $150,000 to $200,000 per season as the cast members of RHOC. Meanwhile, her dad, Michael Dodd, also made a substantial fortune from his business profession Today, his net worth is estimated to be $550 thousand.

Apart from that, Kelly and Michael sold their Corona Del Mar, California home for $5 million in 2017, after the divorce.