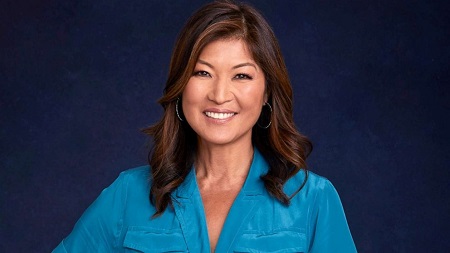 Juju Chang is a Korean-American Emmy Award-winning television journalist who is known for her work at ABC News. After working as a special correspondent and fill-in anchor for Nightline, she reports currently for Nightline as an anchor. Moreover, she has served for ABC News’ morning news program Good Morning America from 2009 until 2011.

Juju was born on September 17, 1965, in Seoul, South Korea as Hyunju Chang. But she moved to the United States in 1969 at the age of three with her parents Okyong and Palki Chang. Her dad is an owner of the Friendship Inn in Sunnyvale, Calif. As per her citizenship, she is American and is of mixed ethnicity. Further, she studied at the Marian A. Peterson High School and graduated from Adrian C. Wilcox High School in 1983.

Who is Juju Chang Married?

Chang who is a graduate of Stanford University is a happily married woman. She tied the knot with her long term life partner, Neal Shapiro. He is known as the President and CEO of WNET. Also, he spent thirteen years at ABC News as a news producer.

Chang, 54, and Neal, 62, were married on December 2, 1995, in the hush-hush wedding ceremony. Their big day took place at the 200 Fifth Club in New York where Rabbi Bernard Bloom officiated the ceremony. During that time, the newlyweds converted to Judaism.

Recently in 2019, the former reporter at KGO-TV in San Francisco, Juju and Shapiro, the former executive producer for Dateline NBC and the President of NBC News has celebrated their 24 years of the marriage ceremony. So far, there is no news about their extramarital affairs on the press as they lead a happy life together.

What is Juju Chang's Net Worth?

Since beginning her journalism career in 1984, Juju Chang has successfully maintained a huge amount of money. As of 2020, her net worth is estimated to be over $2 Million. Allison Rosati is another American famous journalist with a net value of $3 Million.

Chang has been working on ABC as Nightline's co-anchor since 27th March 2014, replacing Cynthia McFadden. According to sources, the Abc News Nightline special correspondent employee is making the wage from $85914 to $123304. Well, she's been working at the station for six years and her annual income is around $80,000.

Juju started working as a desk assistant for ABC in 1984. Seven years later, she started serving for World News Tonight as a producer and off-air reporter in 1991. Then in 1995, she joined the ABC affiliate, KGO-TV in San Francisco where she served as a reporter.

But in 1996, she returned to ABC News after a year at KGO-TV. At ABC, she covered various news as a correspondent including White House, Capitol Hill, and the 1996 presidential election. In 1998, she also returned to World News Tonight where she covered such stories such as Hurricane George, the bombings of U.S. embassies in Kenya and Tanzania, and the anniversary of the Chernobyl nuclear disaster.

In 2014, Chang was named co-anchor of Nightline after GMA. Furthermore, she has also hosted a series for American public broadcaster, PBS.