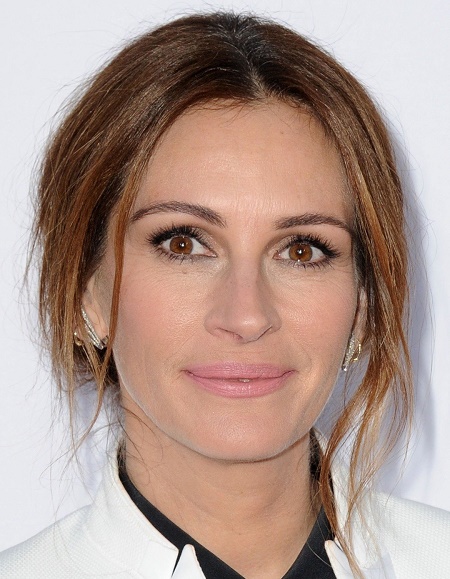 Julia Roberts is a highly-acclaimed American film actress and producer who is now considered as the highest-paid star in the Hollywood industry. Likewise, she made her first big-screen debut through 1988's film Satisfaction. Since then, she has acted in many famous films like Pretty Woman (1990), Mystic Pizza (1988), Notting Hill (1999), Money Monster (2016), and Wonder (2017).

Tied the Knot with Cameraman, Daniel Moder in 2002

Yes, Julia, 53, is happily married to Daniel Moder, 51, who is two years junior to her. She is an American cinematographer.

The lovebirds first met on the set of Julia's film The Mexican in 2000. At the time, he was still married to his ex-wife, Vera Steimberg Moder while Roberts also dating her ex-boyfriend, Bratt.

But after Daniel and Vera's divorce, the two walked down the wedding aisle on July 4, 2002. Recently, in early 2020, the married couple celebrates their 18th wedding ceremony.

Do Julia and Daniel Have Children?

Yes, Julia and her partner, Daniel have three children from their flourishing marriage. They became parents for the first time on November 28, 2004, when they welcomed their twins a son Phinnaeus Walter and a daughter Hazel Patricia.

On June 18, 2007, they again welcomed their bundle of joy or youngest son Henry Daniel. Now despite their busy schedule, the happy parents still manage their time to take care of their young kids. As of now, the family of four resides in Malibu, New York City, New York, California, and Taos, New Mexico.

Yes, you have read that correctly. Julia was once wedded 10 years her senior country singer Lyle Lovett, now 62 years. They got hitched on June 25, 1993, at Marion, Indiana at St. James Lutheran Church.

But they could not continue their union for last long and dedicated to separate. The ex-couple ended their marriage in March 1995 after two years of union.

Since the spilt, she had a relationship with British actor Daniel Day-Lewis in 1995. The same year, Roberts was also rumored to have hooked up with actor, Etan Hawke. In 1995, she and American-Canadian actor Matthew Perry started dating after meeting on the set of TV series “Friends”. However, the ex pair broke up in 1996. Then she dated a fitness guru Pat Manocchia.

The TV star had a short-lived romantic relationship with Benjamin Bratt from 1998 to 2001. In addition, she was rumored to be dating George Clooney in 2000.

Not only Lyle but she had a number of a high-profile relationship with various famous celebrities.  The 1.75 m tall actress initially had an encounter with Billy Idol in 1984, whom she first met on a flight. Then she started dating an actor Dylan McDermott. They were together from 1988 to 1989.

Also, Julia was rumored to be dating her Pretty Woman co-stars Richard Gere in 1989. In 1992, Julia was briefly engaged to British actor Kiefer Sutherland. But they called off their engagement three days before a scheduled marriage on June 11, 1991.

Following her break up with Keifer, she fell in love with Jason Patric and dated him until 1992.

How Much is Julia Roberts Worth?

As of early July 2020, Julia Roberts has a whopping net worth of $250 million. She has accumulated her total fortune throughout her three-decade of successful acting and producing work. Today, she makes in the range from $20 to $30 million a year as a salary from films and various endorsements deals.

Apart from acting gigs, Roberts settled $6 million from an endorsement deal with Gianfranco Ferre in 2006. In addition, she has been serving as a global brand ambassador of luxury perfumes and cosmetics brand named Lancome Paris since 2009. In 2010, she earned $50 million with a five-year deal with Lancome.

In the meantime, Julia runs the film studio Red Om Films along with her sister Lisa, 55. She also served as an executive producer of the first four films in the American Girl Movie Series from 2004 to 2008. Aside from that, she is an active supporter of UNICEF and a spokesperson for Earth Biofuels and chair of the company's advisory board.

As we all know, Julia Roberts has established herself as one of the renowned actresses in the entertainment industry. Throughout her entire life, she has performed on uncountable hits movies, which helped her make one of the most bankable stars in the world.

Overall, her movies strongly made more than $2.8 Billion at box office releases.