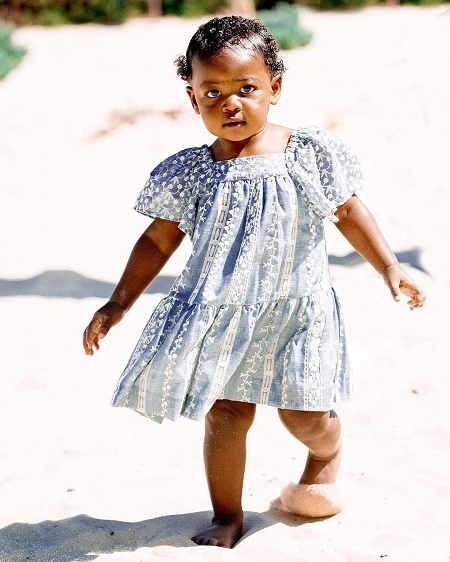 Some kids are lucky enough to be famous due to their parents' fame and name. Kaavia James Union Wade is one of that celebrity kids who gained worldwide fame since her birth. Well, she is known as the single daughter of the National Basketball Association (NBA) superstar, Dwyane Wade, and American actress, Gabrielle Union.

She was born on November 7, 2018, on Wednesday in the United States via a surrogate mother. She is the grandchild of Theresa Union, Sylvester Union, Jolinda Wade, and Dwyane Wade Sr. As per her citizenship, Kaavia is American and belongs to the African American ethnicity.

Her Parents Are Happily Married Couple

Star daughter Kaavia is only one year old as of now so there is no question about her love affairs. In fact, she is still in the supervision of her parents and enjoys her childhood along with her parents and siblings in Los Angeles.

When it comes to her parents' relationship, the lovebirds have been sparkling their married life for over five years. Wade and Union had their first interaction in February 2007 while co-hosting a sponsored Super Bowl party. But they two made their relationship public in 2009.

Similarly, the lovebirds announced their engagement news in Dec 2013. And the cost of the diamond ring was reportdely around $1 Million. Finally, they walked down the wedding aisle on August 30, 2014, in Miami, Florida. But it will be the second marriage for both of them.

Dwyane's two sons and his nephew also attended as guest members for their big day. The newlyweds went for a honeymoon in the Maldives and Tanzania.

Has Three Oldest Half Siblings

Zaire born on February 4, 2002, and Zaya born on May 29, 2007, are children from Dwyane's previous relationship with ex-wife, Siohvaughn Funches. After dating for five years, they exchanged the vows on May 18, 2002. Likewise, the exes spouses were in a conjual life for eight years until 2010.

Similarly, Xavier,6, who was born on November 10, 2013, is the daughter of ex-couple, Wade, 38, and his former lover, Aja Metoyer. The NBA star and Ajay started dating in 2013 when Union and Wade take a break for some reason.

On the other hand, her actress's mother, Gabrielle who is famous for "Being Mary Jane" actress, was once wedded to Chris Howard in 2001. Chris, 45, is a retired American professional running back football played for the Jacksonville Jaguars in the NFL. They got divorced in 2006 after being married for five years.

Kaavia James is now living a luxurious lifestyle being the child of millionaire parents. Meanwhile, her dad, Dwayne Wade, has a net worth of $120 Million as of early June 2020. He has earned most of his impressive worth through his successful career as a basketball player.

During his NBA career, Dwyane who is 6 ft 3 in tall reportedly made $198 million as a salary. Not only this but also he has acquired an extra million dollars from primarily shoe contracts and various endorsements deals. Whereas her mother, Gabrielle Union, 47, now shares a total net value of $40 million. She credits most of her assets to her modeling and acting gigs.

As a real estate, Wade and Union purchased a $22,000 square feet mansion in Hidden Hills, California for $20 million in February 2020. Moreover, in 2018 the couple also bought a $6 million mansion in Sherman Oak. They also buy a huge $10.7 million waterfront estate in 2010, in Miami. Now, this land is listed for sale with an asking price of $29 million.