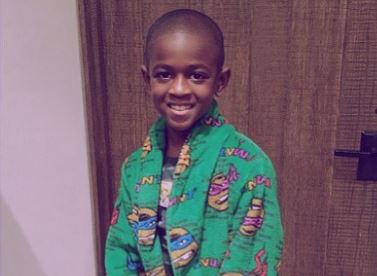 After Gabrielle Union-Wade posted a photo of her family with her son turned daughter Zion Malachi Airamis Wade, the picture went viral over social media. Many celebrities followed up with it where Zion was wearing a crop top along with a long white fingernail.

Zion is the daughter of former Professional basketball player, Dwayne Wade and his former wife, Siohvaughn Funches. The former couple married in 2002, and the relationship could not last long before ending up in 2011.

Father Dwayne refers Zion as She!

Yes, Zion is a boy turned girl who was born on May 29, 2007, in Los Angeles. He remained in the fathers' custody after the separation of their parents. Up until late 2018, Zion could be seen wearing boy's clothes and shared the same values.

But soon the family started to see changes in all his behavior and lifestyle. His family stood as his backbone from the beginning till now. After many hatred comments began to come in Gabriel's Post, Dwayne took the responsibility to write down a tweet.

In his tweet, he mentioned the courage his son had to accept the reality and to move on.

Zion is still a teenager and at this moment, he is not involved in any relationship status. His father, however, went through an unsuccessful love before marrying Gabrielle.

Before getting married to Gabrielle, Dwayne was involved in more than one affair and a love relationship. Dwayne married his High School girlfriend, Siohvaughn Funches in 2002. The couple had two children, Zaire Wade, and Zion Malachi Airamis Wade.

The couple started living separately from 2007 but legally separated in 2010. Dwayne was in a relationship with actress, Gabrielle since 2009. The couple separated for some career demands however got engaged in December 2013.

While they were separated, The NBA player had an affair with Aja Metoyer and conceived a son. Dwayne and Gabrielle went on to walk down the aisle on August 20, 2014. Ever since they have been living together, and the love bond seems to be growing day by day. The couple welcomed a daughter on November 7, 2018, via surrogate.

Malachi Airamis Wade is currently just over 12 years old and attends Sierra Canyon School in Chatsworth, Los Angeles. He is one of the members of the cheerleading squad of the school. Like the children of rich parents, Riley Curry, Zion is living a happy life.

Zion's father, Dwayne Wade, has a net worth of $120 Million. He has accumulated all his net worth through his 16 years career of basketball. He played along with Miami Heats along with Shaqir O’Neal's father, Shaquille O'Neal  for most of his career.

Along with that, His step-mother, Gabrielle Union, has a net worth of $20 Million. The American actress, voice artist, activist, and the author has been able to earn all her money through her acting career. Top Five, Miss Dial, In Our Nature are some of Gabrielle's famous movies.

Dwayne Wade Listed his $32.5 Million Mansion for sale in last September. However, as no one was interested in the price, he dropped the price to $29 Million as per the Los Angeles Times. He had bought the lucrative Mansion for $10.645 Million back in 2010.

After Dwayne bought a villa in the Sherman Oaks neighborhood of Los Angeles for $6 Million, he is trying to sell the house in Florida.

Do Visit Married Celeb For More Information About Celebrity Children!!!