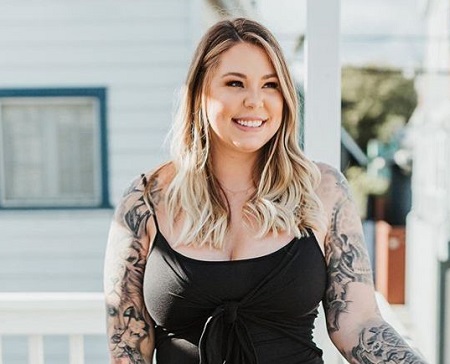 Kailyn Lowry is an American reality TV personality, author, and as well as public speaker. However, she gained worldwide popularity after starring as the cast member in the second season of the reality TV series 16 and Pregnant on MTV from 2009 until 2014. Also, she is starring in the next reality TV series Teen Mom 2 since 2001.

Kailyn Rae Lowry was born on  March 14, 1992, in Honesdale, Pennsylvania to Suzanne Irwin while her father’s name is still not unknown. Her father was absent from her childhood but first met him when she was 17 in 2009. She has a sister whose name is Mikaila Shelburne. She has received a bachelor's degree in mass communications from Delaware State University so far.

On and Off Relationship With Ex-Boyfriend Chris Lopez

Meanwhile, it is still not confirmed whether or not Kailyn and her ex-boyfriend Chris Lopez are still dating. But the two who broke up in last year's 2019 often pointed to their love story and left fans surprised by sharing pictures on their respective Instagram story.

Even after the spilt, The Pride Over Pity author posted Chris' video using her haircare products, Pot Head on her TikTok page. Although she was seen in the video, she extends her hand to pick up one of the products on his lap.

Further, the MTV star posted a tanned picture of him wearing a shirt and jeans on March 2020, but with a heart emoji blocking out his face. But Lopez said she had a new boyfriend while pregnant with her second child at the source. But Kail has not commented on the statement of a new boyfriend.

Kailyn revealed in February that she is welcoming her fourth child but her second her ex Chris. The on-again, off pair, also shares one son, Lux Russell Lowry, born August 5, 2017. Now, aside from their drama, Kailyn is living a happy single life and is staying with her child at home amid coronavirus.

Kailyn is A Divorced, Woman

Lowry was previously married to US Air Force member Javi Marroquin. After the first meeting back in 2011, the ex-spouses tied the knot on September 4, 2012, when Lowry was pregnant.

But after three years of marriage, A Letter of Love author filed for divorce in December 2015. Javi blamed Kailyn for having suffered a miscarriage, and later the two went on Marriage Boot Camp together and refuted claims that their union had ended because of infidelity.

Their divorce was finalized in October 2016. They agreed to take their son, Lincoln Marshall Marroquin born November 16, 2013, 50/50 custody. Now, the two do their best to co-parent their 6 years old son Lincoln.

Additionally, the Teen Mom Kaily shares one daughter Isaac Elliott Rivera who was born on January 18, 2010, with her ex-partner, Jonathan Rivera. The two were sweethearts from high school.

Working as a reality television personality, Kailyn Lowry earns a considerable amount of fortune. As of early July 2020, her impressive net worth is reported to be $25 thousand which she earned through her successful career as a TV personality.

An American reality TV personality's annual salary is about $345,000 as of 2020. So Lowry might obtain the same salary per year as an accomplished and successful television personality. Today, she is hosting her own Podcast series Coffee Convos with Lindsie Chrisley.

In addition, she was cast in the spin-off Teen Mom 2 show in 2010 and starred in each of its 8 seasons. She has worked alongside Jenelle Eason, Chelsea DeBoer, and Leah Messer in the series. Thus, she must have probably received a lot of dollars from it too.