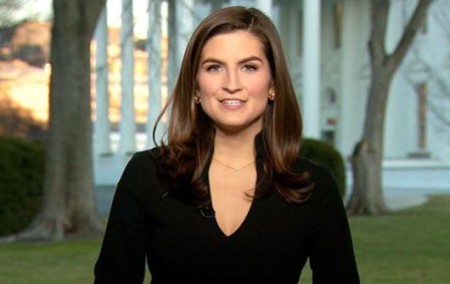 Kaitlan Collins was born on April 7, 1992, in Prattville, Alabama, the United States. Her father, Jeff Collins is a senior mortgage banker. She has three siblings; two brothers, Brayden and Cole, and a sister named Lena Grace. Kaitlan attended Prattville High School. She graduated with a Bachelor of Arts in Political Science and Journalism from the University of Alabama in 2014.

The 28-year-old, Kaitlan Collins is said to be engaged with her fiance, Will Douglas, who is the owner of the Crimson Care Pharmacy Group. Currently, the couple is low-profile about their relationship and also it is not known whether they are together or not. Both Collins and Douglas haven't shared their recent pictures on social media so it is unsure if they are still a couple.

Kaitlan and Will first began dating around 2015 as Will first appeared on her Instagram in July 2015. They used to travel a lot and attended several events together. It seems she and her partner, Will doesn't like to show their relationship in public or they have split already. Further, the correspondent is not married yet.

The White House correspondent for CNN, Kaitlan Collins has a net worth of $2 million as of 2020. She has almost seven years of working experience in the journalism profession and has amassed a decent fortune.

Since joining the CNN network in 2017, Kaitlan broke several stories in her coverage of the former president, Donald Trump. Additionally, she travelled with Trump in Asia and reported extensively on the Senate special election in her home state of Alabama.

After graduating from the University, Collins began working as a freelance blogger and writer. In 2014, she joined a news website called, The Daily Caller as their entertainment reporter and after three years she was promoted as a correspondent.

Watch a clip of Kaitlan Collins!

In 2017, Collins moved to CNN and continued her previous role as White House correspondent. She is among the youngest correspondents. In 2018, Collins was included in Mediaite's list of the 50 Most Influential People in News Media. Similarly, Crain's NewsPro's 12 named her to Watch in TV News in January 2019. Additionally, she was one of Forbes magazine's 30 under 30: Media.