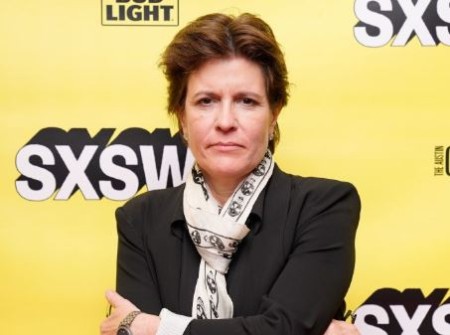 The 57-year-old, Kara Swisher is Silicon Valley's most feared and reputed journalist. Yes, she has built quite a reputation. Kara is an American technology business journalist who co-founded a technology news website called Recode. She has worked for The Wall Street Journal as a writer. Further, Swisher is also an author.

Kara Anne Swisher was born on December 11, 1962, in the United States. She earned her Bachelor's degree from Georgetown University's Edmund A. Walsh School of Foreign Service. Likewise, she received a Masters in journalism from Columbia University in 1985. Now, let's know some of Kara's interesting facts.

Kara was married to Megan Smith, a former Chief Technology Officer of the United States. The same-sex couple married in 1999. Their wedding took place in Marin County before same-sex marriage was legal in California.

Kara and her ex-wife remained married for 19 years until they divorced in 2018. Like Swisher, her ex-wife is also an accomplished personality. She was the assistant to the President serving under then-President Barack Obama. While they were together, Kara and Megan were listed among the top powerful couples.

Kara and Megan share two sons, Alexander, and Louis, whom they adopted. The kids are now adults and can be seen on their parents' social media.

Megan earned a substantial amount of wealth from her stint at Google. But Kara has stated that she declined to take any assets in their divorce settlement. She also revealed that except for their children's joint expenses, the couple has no financial ties.

Swisher is currently engaged to her girlfriend-turned fiancee, Amanda Katz. They welcomed their first daughter, Clara Jo Swisher Katz, in October 2019. Katz is a writer and editor who currently works as a senior editor at CNN Investigates. Previously she was the deputy editor at the Boston Globe.

Kara hasn't shared about her upcoming wedding plans with Katz. The couple seems perfectly happy with each other. As new parents, they are focused on spending much time with their daughter despite a busy schedule.

How much is Kara Swisher's Net worth?

Swisher's exact net worth is not available, but she might have an estimated net worth of $5 million, which is similar to Jodi Kantor. Swisher has been active in the journalism industry since 1997. She has accumulated a decent amount of earnings throughout her 23 years of career. As a technology business journalist, Kara earns an annual salary of over $140,000.

In 2015, Vox Media acquired Swisher's website, Recode, but later she became the host of a weekly podcast called Recode Decode. Further, Kara has been involved in several other ventures. Her fiancee, Amanda, has a net worth of $3 million, while her ex-wife, Megan, has a net worth of $6 million.

Apart from wealth, Swisher has built a sharp image for herself. While she worked for The Wall Street Journal in 1997, Swisher created a column about the culture of Silicon Valley. She was called the most influential reporter during that time.