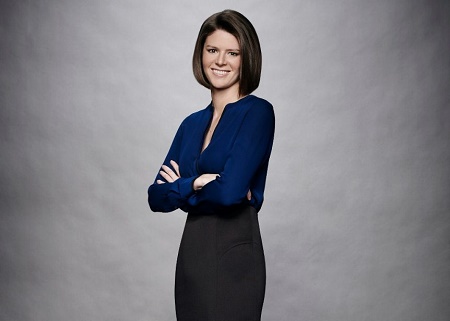 Are your regular viewers of popular channel MSNBC? If yes, then you definitely heard about MSNBC's political correspondent and commentator, Kasie Hunt who is regularly seen on Morning Joe. She is an American journalist who is also well known for anchoring Microsoft News Broadcasting Company (MSNBC), Kasie DC.

Kasie Hunt was born on 14 May 1985, in Wayne, Pennsylvania, United States. Likewise, she is the elder of two daughters of the father, Bruce Hunt, and mother, Carly Hunt.

Her father is a manager of real estate design and construction for Penn Medicine whereas her mother is a yoga teacher in Easton. Hunt has one younger sister, Carly Hunt, a former golfer. Hunt's citizenship is American and belongs to white ethnicity.

Know the details about her educational achievements & Career

Regarding her education, she first completes her graduation from Conestoga High School, Pennsylvania, in 2003. Then, she joined George Washington University and earned her bachelor’s in international affairs in the year 2006.

Additionally, Kasie Hunt further attained the University of Cambridge and received her Masters in sociology. While studying in college, she started her internship at NBC News as deputy political director. This marked the start of the career of Kasie as a journalist. Along with Kasie, Hallie Jackson and Kristen Welker also work in the MSNBC.

She is a happily married woman!

The 34 years old reporter, Kasie Hunt, is no more single as she is a happily married woman. She tied the nuptial knot with her husband, Matthew Mario Rivera on 6th May 2017. Without getting engaged, this lovely couple wedded at Shenandoah Woods in Stanley Va. Marian Sieke.

Matt is an American multimedia producer, reporter, and an adjunct professor at NYU(New York University) and is also a Senior Digital Producer for NBC’s Meet the Press.

The first encounter of the couple

Now, talking about their first met, Hunt met Mario for the first time at the NBC News. At that time, Matthew was working as the network’s producer. Since then, the couple is flaunting their relationship with no sign of conflict.

Is she is welcoming her first child?

Yes, Kasie and her husband Matthew recently welcomed a new bundle of joy in their family a son named Mars on 6th September 2019. Likewise, she announced her pregnancy news on Morning Joe in March 2019.

Not only this, NBC News Capitol Hill host revealed the name of their kid via  her Instagram post back in March 2019 and caption it 'Baby Hunt Rivera August!.' Also, she displayed a photo of her baby bump in late July of 2019 via Instagram.

Staggering Net Worth and Salary of the American correspondent

Kasie Hunt is an NBC News Capitol Hill correspondent and commentator who has a net worth of $3 Million. With more than a decade of experience covering United States political campaigns and significant events, we can assure that her wealth will surely increase in the near days.

Involved in a field of journalism media as a correspondent, Hunt's annual salary reaches over $250 thousand at NBC, including bonuses and incentives. Besides, she owns a red 1989 model Corvette worth around $36,785. Further, she has not revealed her investment sector as well as her property and house.