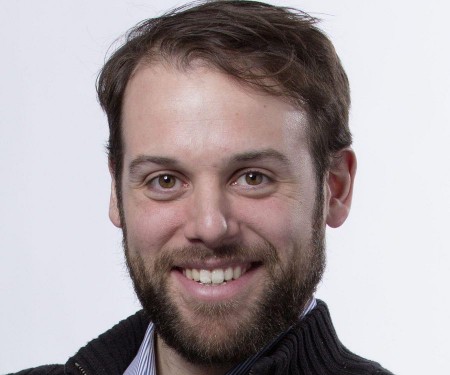 Matthew (Matt) Mario Rivera is the Senior Digital Producer for the NBC's "Meet the Press with Chuck Todd," based in Washington, D.C. He is responsible for managing and extending the brand on digital platforms as being the digital lead for the longest-running show in television history.

Further, Matt is married to Kasie Hunt, a political correspondent who is an NBC News Capitol Hill correspondent covering across all NBC News and MSNBC platforms. They are also proud parents of a lovely baby boy named Mars.

The 37-year-old Matt Rivera is married to his wife, Kasie Hunt. On August 13, 2016, Matthew romantically proposed Kasie asking her to be his wife, and in all excitement, she said yes.

Matt and Kasie exchanged their wedding vows on May 6, 2017, in a lovely wedding ceremony. The couple married at Shenandoah Woods, a lodge and retreat in Stanley Va. Marian Sieke. The couple headed to Thailand for their two-week honeymoon trip.

Their nuptial ceremony was covered in the media and Washington Post as well as the New York Times wrote about their union.

With over two years of marital solidarity, the lovebirds are now parents to a baby boy named Mars. On March 13, 2019, Kasie announced the pregnancy of her child, and on September 4, 2019, the couple welcomed their first child.

How Did Matthew And Kasie Met?

Matt and Kasie first met each other in late 2014, while they both were working at the NBC News in Washington. At the time, Matt was the network's producer, while Kasie was the Capitol Hill correspondent.

On May 7, 2018, Kasie shared a sweet picture on her Instagram, wishing the couple's first wedding anniversary. They both never miss any chance to express their love on social media and the public as well.

Addition Of A New Member

With the birth of their first child, the NBC News family got a bit bigger in the cutest possible way. When Matt and Kasie welcomed a 9-pound, 8-ounce baby boy Mars Hunt Rivera on September 4, 2019, they could hardly keep their joy.

The new parents said that their baby boy has his father's mouth and his mother's chin. Sharing their happiness with TODAY, the couple said:

“We love him so much and can’t wait to see what joy he brings to our family of three.”

Rivera and Hunt didn't know the sex of their baby beforehand, and gender was a surprise for them.

How Much Is Mattew's Net Worth?

The senior digital producer for "Meet the Press with Chuck Todd," Mr. Matthew Mario Rivera, enjoys the net worth of $2 Million as of 2019. The primary source of his income comes through his media career.

Apart from being NBC's digital lead, Matt produces a daily election podcast as well as manages NBC's "Meet the Press" and MSNBC's "MTPDaily." Further, he jointly operates with the network's sales and brand partnerships teams.

Before joining MTP, Rivera was a senior producer with the NBC News original video unit. He produced in-depth video series, animated and news-driven explainers for NBC, MSNBC, and the Today show. Rivera has also worked as an adjunct professor at New York University, teaching classes in video production and journalism.

The NBC News Capitol Hill correspondent and commentator, Mrs. Kasie Hunt, have a net worth of $3 Million. She earns an impressive amount from her journalism career.

As per some reliable sources, Kasie earns an average salary of over $105,000 per year as a political correspondent. There is no doubt the media's star couple lives a lavish lifestyle.

This article aims to provide detail information about Matthew Mario Rivera's personal as well as professional life. To know about your favorite media personality, do follow marriedceleb.