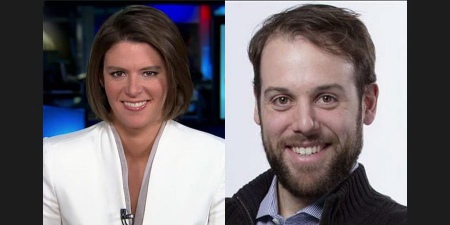 Kasie Hunt walked down the wedding aisle with her father to marry the love of her life Matthew Mario Rivera in 2017. Their matrimony took place in a peaceful environment which was accompanied by their loved ones.

A few months back, the news about Kasie giving birth to the couple's first child came out. What's the current status on that? To know more about her married life, keep reading.

A Match Made in Heaven

Matthew Rivera kissed Kasie Hunt after being pronounced husband and wife at Shenandoah Woods in front of their family and friends. Baptist Minister Marian Sieke officiated the wedding ceremony on March 6, 2017.

Rivera first locked eyes with Kasie at NBC News headquarter in Washington. Though the exact date of the commencement of their beautiful relationship is not disclosed, some online reports suggest that the couple started dating around 2015.

Nearly after a year of dating, On August 13, 2016, Matthew romantically proposed his lover by kneeling down on one knee. He took the ring in one of his hands and asked her the big question to be his forever.

Kasie, in all excitement, said, "Yes," with some shed of tears in her eyes. After a year of the proposal, the couple made their union possible in a peaceful resort with love spreading in the air. It's been two years as of 2019, and their bond has grown stronger than ever before.

Matthew and Kasie have so Much in Common!

Rivera and Hunt both are a family person as they keep the responsibility of their brood before anything else. Scrolling through their social media, we can know that the lovely couple loves animals, Hunt even posted a picture of three cute dogs on her Instagram.

Not just that, Matthew works as an adjunct professor at NYU and is also a producer and reporter at The Wall Street Journal. Kasie, on the other hand, is a political reporter at MSNBC alongside the likes of Chris Jansing, Elise Jordan, and Mariana Atencio, to name a few.

Both are from the multi-media industry, which definitely brings a common topic for conversations.

The Family of Two became Three!

Nearly two years of their marital life, the NBC correspondent is ready to raise a toddler together with her hubby. On March 13, 2019, Hunt showed her baby bump on one of her Instagram pictures and also announced she is becoming a mom.

"I hope someday Baby Hunt Rivera thinks it was pretty cool to be there for this piece of history. We've done a lot of pretty remarkable things together already. Thank you thank you @leighanncaldwelldc for the pic".

Well, that news became a reality on September 4, 2019, after Kasie delivered a baby boy to expand their family. Matthew and Kasie named their little son Mars Rivera. The couple recently shared a picture of their son on Kasie's social media profile.

Unlike other couples, Kasie has not shared much pics of her newborn baby as she wants to keep her son out of public attention as of now.