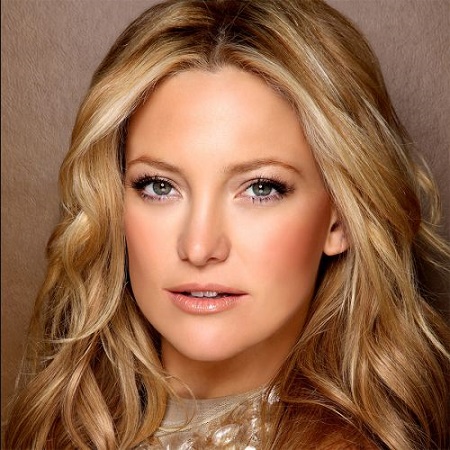 Kate Garry Hudson was born on April 19, 1979, in Los Angeles, California to the Academy Award-winning actress Goldie Hawn, and an actor, comedian, and musician, Bill Hudson. After her parents divorced in 1982, she and her brother, Oliver Hudson was raised by her mom, and her long term partner, Kurt Russell. Further, she has four half-siblings named Emily Hudson, Zachary Hudson, Lalania Hudson, and Wyatt Russell.

Yes, the 41 years old actress has been enjoying her beautiful love life with Danny Fujikawa, now 34 years since December 2016. He is a musician and a former guitarist and lead singer for the L.A.–based folk-rock band Chief.

Hudson and her boyfriend, Fujikawa have known each other for more than a decade. But they had their first interaction through her best friends, Sara and Erin Foster. Danny who is the founder of the record company,  Lightwave Records is Sara and Erin's stepbrother.

More joyfully, they gave birth together to their first child, a baby girl Rani Rose Hudson Fujikawa. Rani, 1, was welcomed on October 2, 2019. "We have decided to name our daughter Rani (pronounced Ronnie) after her grandfather, Ron Fujikawa," Kate captioned on her Instagram during her birth time.

Before started dating, Fujikawa, she was previously in a conjual life with American musician, Chris Robinson, 53. They exchanged wedding vows on December 31, 2000, in Aspen, Colorado.

They had one son Ryder Russell Robinson who was born in January 2004. But, after nearly six years of marriage, the actress' publicist announced their seperation on August 14, 2006.

Yes, in early 2010, the fashion entrepreneur ended her engagement with Matt Bellamy, 42. He is a musician, songwriter, and singer who is famous as the lead singer of the rock band, Muse, formed in 1994.

The lovebirds became engaged in April 2011 after meeting for the first time at the Coachella music festival. During their relationship, they welcomed one son, Bingham Hawn Bellamy, in July 2011.

But, Hudson and Bellamy called off their engagement on December 9, 2014. Now, the two seem to be on good terms and happily co-parenting their son.

How Much Worth is Kate Hudson?

Kate Hudson has a net worth of $80 million as of June 2020.She has been in the Hollywood Industry for more than two-decade. She has accumulated most of her fortune through her successful career as an actor and film producer.

As an actress, her salary might fall in around $69000, which is the average salary for a Movie / Film Actor or Actress in the United States. Also, she is co-founder of the fitness brand and membership program, Fabletics, which is valued to $250 million today. On the other hand, her mom, Goldie Hawn has $101 million net worth as of June 2020 through her acting and producing career.