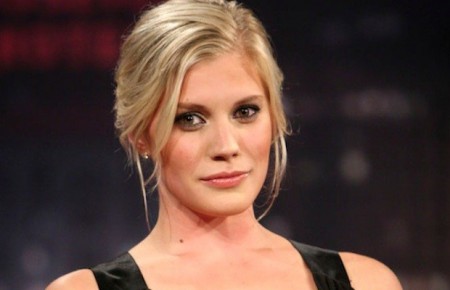 The 39-year-old, Katee Sackhoff is an American actress best known for her role on the Sci-Fi Channel's television program Battlestar Galactica. For her part, she won the award for Best Supporting Actress on Television in 2005. From battling cancer in real life to fighting evil in reel life, Katee has risen to become a prominent actress of her time.

Sackhoff appeared on lead roles in the films Halloween: Resurrection, White Noise: The Light, Batman: Year One, Sexy Evil Genius, Oculus and Don't Knock Twice. In 2019, Sackhoff appeared in a leading role on the Netflix science-fiction drama series, Another Life.

Sackhoff's found love again. She is currently in a relationship with actor/ producer Robin Gadsby. The couple, however, kept their affair a secret before but now, they are spotted together in public events.

Scrolling through her Instagram, we can find that, the duo started dating each other since September 2019. On September 29, 2019, Sackhoff posted a photo of her lover and herself during a Alive & Running marathon.

One of Hollywood's most gorgeous actress, Katee Sackhoff, is an unmarried woman. To the present date, Miss Sackhoff hasn't tied her wedding knot with any man; therefore, she doesn't have a husband as of now.

In 2012, Sackhoff was engaged to her old-time boyfriend, Scott Niemeyer, a film producer known for Pitch Perfect (1 & 2), and My Big Fat Greek Wedding 2. The pair began dating back in 2005 and dated for seven years until Niemeyer popped the question.

Katee and Scott got engaged in 2012 and were about to exchange their wedding vows. However, a year later, Katee realized she wanted different things from life and broke up with Scott.

After breaking up with her longtime boyfriend-turned fiance, Katee found love for the second time with actor Karl Urban. The 47-year-old actor has appeared in many high-profile movies such as The Lord of the Rings trilogy in the role of Eomer.

Katee and Karl announced their relationship in the mid-2014. The couple developed a strong bond and appeared in many social events together. Katee was recovering from her previous broken engagement, while Karl was regaining his joy after his failed marriage with a longtime partner, Natalie Wihongi.

From his previous marriage, Karl has two sons named Hunter and Indiana. The couple's fans were excited to see them as husband and wife, but after years of togetherness, Katee and her then-partner, Karl decided to step down from their relationship.

The Battlestar Galactica's popular actress, Miss Katee Sackhoff, enjoys a decent net worth of $4 million as of 2019. Throughout her acting journey for more than 20 years, Sackhoff has managed to amass a hefty sum of wealth, which is similar to actresses such as Otmara Marrero and Brooke D'Orsay.

The primary source of Sackhoff's income and earnings comes from acting in films and tv shows. Critics and fans praise her work on screen, and she is one of the loved actresses in the sci-fi community. In 2013, Katee appeared on box-office hits such as Oculus (earned $44 million) and Riddick (earned $98.3 million).

Katee's Per Episode Salary on Television

The lead actor of Netflix's science-fiction drama series, Another Life, Katee, charges around $60,000 per episode on television. Her most beloved role was of Kara Starbuck Thrace in the military science fiction series, Battlestar Galactica.

YouTube: Katee Sackhoff will return for Netflix's Another Life Season 2

Sackhoff will appear in another season of Netflix's Another Life, which is a space-oriented show. There is no doubt that she will earn higher incomes in the coming future.

Going through Sackhoff's Instagram and YouTube channel, it seems that she is on a quest to find adventure by trying different things.

She is actively involved in charitable causes such as running a marathon for the Suicide Prevention Center Alive & Running.

To know more about the actress, follow Married Celeb.