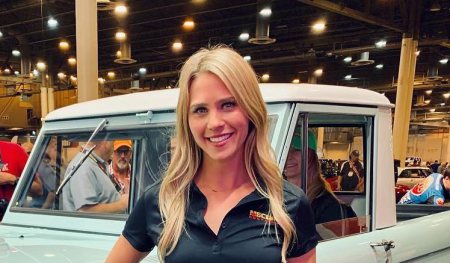 Who is Katie Osborne?

When it comes to speeding cars and races, we often imagine adrenaline filled racers and enthusiast. People likes to watch those thrilling car races and commentators. And today we are going to talk about Katie Osborne who currently host the Powernation TV, America's most watched automotive how-to-programming and is the most highest-rated, longest-running tech content on television. The show airs on History channel and NBC Sports.

Katie's passion in automotive industry has landed her a notable role in the sports industry media. She has somehow managed to work in an industry that also happens to be her passion. She has split her career between TV reporting/hosting for Fox Sports, ESPN, NBC Sports, CBS Sports, NHL, NFL, X Games, live event hosting, and fashion designing to name a few.

Katie Osborne was born on May 2, 1982, in Indianapolis, Indiana, USA. As of 2019, Katie's age is 37 years old and her birth sign is Taurus. She was raised alongside her siblings but the details about her family background is not available.

She grew up as a Katie grew up as a competitive, national level swimmer and earned a Sports Communication-Broadcast degree from Indiana University.  In addition to her professional drive, Katie is firmly devoted to her family and friends, and enjoys yoga, coffee, tulips, old pickups, and finding ways to help others.

In addition, Katie is also a reporter for Mecum Auctions which airs on NBC Sports. Further, she is the host of Peaking on The CW and the pit reporter for the Forza Racing Championship. Fans can watch her as a trackside reporter for the Red Bull Signature Series on FS1 and a few racing events that happen throughout the year.

When you are someone like Katie Osborne who is the host of most watched television program then it is obvious that fans will always be monitoring your daily updates. More specifically they will want to know your personal life. And, talking about Katie's relationship status she is currently dating a professional racing driver, stunt driver, and tv host, Tanner Foust.

The information regarding the couple's exact dating history is unavailable, but as per sources they first met at racing track. Nevertheless, Katie is happy in her romantic relationship with her boyfriend, Tanner. The duo hasn't revealed their plans about their wedding. we hope that they might become husband and wife soon.

Katie and her partner Tanner attends racing events together and it is also said that they are living together. However, they might not be married as of now. Further, Katie has never said anything about her past affairs. But, Tanner has a daughter from his previous relationship. His ex-wife details are not available.

The host of PowerNation Tv, Katie Osborne has a stunning net worth of $5 million as of 2019. She has worked for several networks including Fox, CBS, NBC, among others. Additionally, Osborne earns over $200,000 annually from her association in several automotive shows.

As of 2019, Osborne is one of the most sought after female sportscaster meaning she has a higher salary than her fellow host. Apart from having a profitable professional career, Katie is also involved in community works and charities. She highy supports a non-profit organization called Make-a-wish.

Along with Katie's adventures in the television world, she is kicking off the Joy Project, a podcast supported by Lifeaid Bev Co. all about discovering joy throughout life’s crazy journey.

Now talking about her boyfriend, Tanner Foust has a net worth of $1.2 million as per celebrity net worth. He earns a colossal amount of money from his career as a stunt/racing driver and television host. He competes in rally, drift, ice racing, time attack adn rallycross with multiple placements, national championships, and world records. Well, actor and racer Frankie Muniz also has a similar net worth.