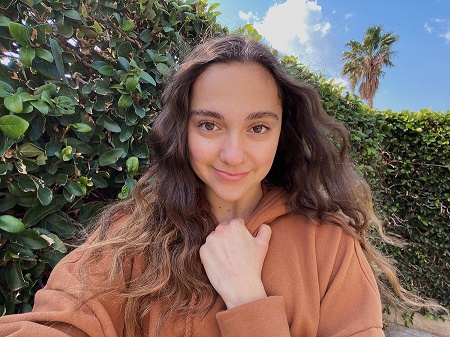 A young professional dancer, choreographer, model, YouTuber, actress, Kaycee Rice is known for being a member of the immaBEAST and lilBEAST dance crews. She was also a guest dancer in season 5 of the reality dance competition series, Dance Moms. Further, she performed on the reality series, America's Got Talent in 2014 with fellow child artist, Gabe De Guzman.

Rice was born on 21 October 2002 to parents Brad Rice and Laura Rice in Los Angeles, California, United States. She and her two elder siblings named Devon Rice and Kyline Rice grew up together.  She is an American citizen and of white ethnicity. She completes her graduation in 2018.

Is She Dating A Boyfriend?

No, the young and talented dancer is just 17 years old and there's no chance she would date any guys. Meanwhile, Kaycee is not linked up in a romantic relationship or attachment with a potential boyfriend. Maybe she might date her future prince in the foreseeable future.

Rice is currently concentrating only on enhancing her dance skills and pursuing her career. But, she is very close to her dance partner, Sean Lew, who was born on November 25, 2001. Both of them started on the dance show called World of Dance in season two in 2018.

For more than six years they are dance partners. Further, she and her dance partner were nominated for the 2018 Industry Dance Awards for the most competitive dancer under 18, along with Charlize Glass, JT Church, and Eva Igo. Also, she is a close friend of Maddie Ziegler.

The Teen Miss Dance Icon enjoys spending her time along with her family. She also owns a dog named Kino whom she called the best buddy ever.

Kaycee Rice is an  American dancer and social media personality who has an estimated net worth of $100,000 as of 2020. She made this fortune throughout her multiple works as a dancer, choreographer, actress, model,  philanthropist, and various endorsements.

Since Kaycee has over 2.3 million followers on her Instagram page, advertisers are charging a certain amount for the post they are making. She also shares sponsored pictures on her social media of herself sporting other Sports apparel. For example, she did commercials for Walmart and Nike.

Rice currently also earns by selling her custom-made T-shirts, hoodies, and other accessories from weirdoapparel.com. Therefore, as a merchandiser, she would earn $63,684. Moreover, she makes a huge amount of money from her YouTube channel.

Initiated Dancing Career At the Age of Four

Rice began dancing when she was four-and-a-half years old and started performing at the age of five. She is trained in different styles of dance - ballet, tap, jazz, lyrical, tumbling, acro, contemporary, and hip-hop.

The younger dancer has also appeared in many music videos including Meghan Trainor’s All About That Bass and Samuel Cristea’s Time to Dance.  She performed in the 2015 Super Bowl XLIX halftime show where she shared the stage with Missy Elliott and Katy Perry.

Besides dancing, Rice got her first acting main role on Disney's short film How To Catch a Ghost. And since then December 3, 2019, she is playing Avery in Brat TVs' new series named The Sunny Side Up Show. She is also a popular YouTuber who has shared her dance moves since 2010, on Kaycee Rice * * Official Channel**.

Visit More Pages On MarriedCeleb, To Read Others Biography Of Your Favourite Idol.