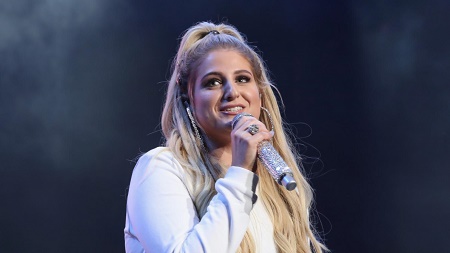 Meghan Trainor is a famous American singer-songwriter, musician, and producer who has been involved in the music industry at the age of 11. The single she's best known for, 'All About That Bass,' which instantly became a global success and sold millions of copies worldwide. Her EP Title released in September 2014 and debuted at # 15 on the Billboard 200 chart.

Meghan Elizabeth Trainor was born on the 22nd December 1993, in Nantucket, Massachusetts. She is the middle child of the jewelry parents Kelli and Gary Trainor and has two brothers, Ryan Trainor (December 17, 1990) and Justin (January 24, 1996). She holds an American citizen and is of white ethnicity. This artist recorded her first song at the age of 14 which was also performed for three years in a jazz band with the trumpet.

Yes, the Grammy Award winner Meghan Trainor is a happily married woman. The  26 years singer got engaged to her long term boyfriend, Daryl Sabara, whom she met at an L.A. house party in 2014. He is an actor who has appeared in various TV series and films.

The beautiful singer walked down the aisle with her dad Gary to “Marry Me,” an original song she wrote. They say say " I do"  in the Trainor's 25th birthday at their Los Angeles area backyard. For their big day, the bride wore a stunning off-the-shoulder Berta gown, complete with a dramatic veil.

How Rich is Meghan Trainor?

Meghan Trainor has an impressive $8 Million net worth as of 2020. She amassed this amount from her singing, songwriting, and producing profession. Likewise, since its debut single 'All About That Bass' was released in 2014, her career has taken off. It is still listed as one of the all-time best-selling hits. She is also close with her associates Brian Balthazar and Kaycee Rice.

Official Music Video- All About That Bass

Since signing with Epic Records in 2014, Trainor has gained fame and since then has made for herself a very successful career. During her career, she has released multiple hit songs including Like Lips Are Movin, Dear Future Husband, Marvin Gaye, No, Me Too, I'm Gonna Lose You, Title, and so on.

In addition to a singing career, Meghan Trainor has appeared in different TV programs. Since 2018, she's working as a judge in an American reality television music competition series The Four: Battle for Stardom, broadcast on Fox.

The show also included music manager Sean Combs, music producer DJ Khaled, music executive Charlie Walk, along with Meghan. She also works as a coach for the British TV talent show, The Voice UK, which was produced by John de Mol broadcasting on BBC One.