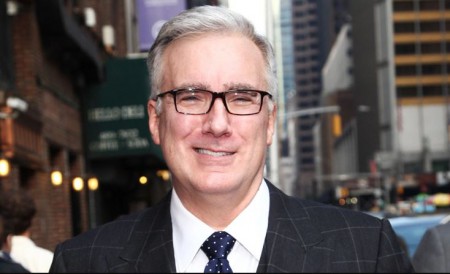 The Cable Ace award winner for Best Sportscaster, Mr. Keith Olbermann is an American sports and political commentator as well as a writer. He is often regarded as the broadcaster who helped revolutionize sports news. Additionally, Olbermann helped invent a new model of liberal cable-news political commentary.

In the 1980s, Keith worked as a sports correspondent for CNN and local TV and radio stations, winning the Best Sportscaster award from the California Associated Press three times. Olbermann is known for programs such as Countdown, Sportscenter, Football Night in America, web series, The Resistance, and many more.

Who is Keith Olbermann's Wife?

The answer to the question of whether the 60-year-old commentator is married or not is very straightforward. Even at the age of 60 years, Keith Olbermann is not married, which means he is a single man who doesn't have a wife.

Olbermann has been in a few relationships with renown female personalities. He dated them for a few years but never tied the wedding knot with anyone. Therefore, Keith, to date, hasn't graced the opportunity to be a parent of a child.

Talking about the Sportscenter's host, he doesn't seem to be interested in marriage as of now. So, in the coming days, he might continue his singlehood.

In the world of media and journalism, some people connect because of their similar thoughts. And, Olbermann once found a woman who, despite his half age, shared the same opinion. Keith dated an author and broadcast journalist, Katy Tur, for three years who works for NBC News.

Katy, who is 25 years younger than Keith, had an affair with him from June 2006 to 2009. They began living together in early 2007 and caught full media attention for their romance. During the time, Tur was beginning her career and was working as a freelance reporter at the CW network.

Katy's relationship with Olbermann turned out to be a remarkable advantage in her career. Olbermann's support landed her a first stable job at NBC New York in 2009. Although they shared a strong bond, Keith and Katy ended their relationship after dating three years. Both didn't reveal the exact reason for their break up but claimed that they separated for a good reason.

At present, Katy is married to journalist, Tony Dokoupil, who is the co-host of "CBS This Morning." Together, they share a son named Theodore "Teddy" Dokoupil.

As per sources, Olbermann dated a television host, Laura Ingraham, who formerly hosted the nationally syndicated radio show, The Laura Ingraham Show, for nearly two decades. The former couple began dating in 1997 but ended their relationship the same year.

Despite having opposite political views, both claimed that their disagreements about politics weren't the reason behind their breakup.

Apart from Ingraham, Olbermann previously dated, Rebecca Lobo, a television basketball analyst, and former professional basketball player. They dated around 1995 and broke up the same year.

The winner of three Edward R. Murrow awards, Mr. Keith Olbermann, has an impressive net worth of $25 Million as of 2019. He has been hugely successful in his professional career. Olbermann spent the first 20 years of his life in sports journalism and later turned into a political commentator.

YouTube: Keith and Dan reflecting their time at ESPN's Sportscenter!

From 1992 until 1997, Olbermann often co-hosted the popular show, SportsCenter, along with Dan Patrick. The two became a famous anchor team, and in 1995, Olbermann won a Cable Ace award for Best Sportscaster. Later, Olbermann co-authored a book with Patrick called The Big Show about their experiences working at SportsCenter.

For your information, Glenn Beck, an American conservative political commentator, is one of the wealthiest hosts who has a net worth of $250 Million with an annual salary of over $20 Million.

Olbermann earns an annual salary of $2 Million from his work at ESPN. In early 2018, he returned to the station, presenting occasional commentaries on SportsCenter. In May 2018, his role expanded as Sportscenter host and occasional ESPN Major League  Baseball play-by-play. This is his third tenure at ESPN.

During the end of his first tenure with ESPN, Olbermann made $350,000 as an annual salary. Further, in November 2008, reports claimes that Olbermann signed a four-year contract extension with MSNBC worth $30 Million with a yearly salary of $7.5 Million.

In early 2011, Olbermann became the chief news officer for the pubic affairs channel Current TV. On March 20, 2012, he was fired from the network, where he was accused of no longer maintaining the moral values and loyalty to the viewers.

Olbermann released his own statement saying that the claims against him were untrue, and the two parties sued each other over Olbermann's firing. Further, on March 12, 2013, it was announced that Olbermann settled his $50 Million legal claims, but nothing more was disclosed regarding the settlement.

While Olbermann hosted ESPN's Sportscenter from 1992 until 1997, he bought a luxurious home in Southington for $351,000 and sold it for $310,000 five years later. The 4,100 square-foot house has a large pool, vaulted ceilings, hardwood floors, and a sweeping view from the backyard. The home is now on the market for purchase with a listing price of $524,900.

Likewise, Keith sold his Manhattan apartment in Trump Palace for $3.8 Million in 2016. His reasons for selling the condo were clear, explaining: "I can’t stand to live in a Trump building anymore." He first listed the house in April 2016 for $3.9 Million.

The longtime host of ESPN's SportsCenter, Keith Olbermann, has won numerous awards throughout his career. During the 1980s, he won the Best Sportscaster award from the California Associated Press three times.

Further, his work at WCVB-TV in Boston earned him 11 Golden Mike awards. In 2003, Olbermann won an Edward R. Murrow award for writing on the "Keith Olbermann Speaking of Everything" show.

Similarly, in 2015, Olbermann's efforts for animal protection were recognized by the Humane Society of America, and the group honored him with a Genesis award.

On September 12, 2016, GQ magazine hired Olbermann as a special correspondent to host a web series covering the 2016 US Presidential Election. The series titled The Closer with Keith Olbermann was retitled The Resistance after Donald Trump's victory.

In November 2017, he announced his retirement from Political commentary and expressing his belief that Trump's presidency will end prematurely and end soon.

In mid-October 2017, Olbermann published a hardcover book through Penguin Random House titled, Trump, is F*cking Crazy (This is Not a Joke) that consisted of 50 essays based on The Resistance commentaries.

The above article provides detailed information about Keith Olbermann, one of the most recognizable sports and political commentator. To know about your favorite celebrity, follow marriedceleb.