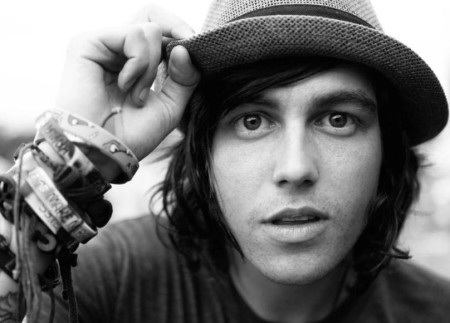 Award-winning musician, Kellin Quinn is one of the most promising singers who is widely popular as the lead vocalist of Sleeping with Sirens, a post-hardcore band. For his notable performances, The Alternative Press named him as the Singer of the Year 2012. Meanwhile, he frequently appears as Ralphie in the musical fantasy drama series, Paradise City.

Quinn was born as Kellin Quinn Bostwick on 24th April 1986, in Medford, Oregon, United States. He also holds an American nationality, and his ethnicity/race is white. Aside from this, he is a married man. To know more in details about Quinn's personal life, read the article to the end.

Sleeping with Sirens lead vocalist, Quinn is already committed to Katelynne Quinn, who's an American fashion model. The couple tied the knot on 27th April 2013, inviting their family relatives and friends.

At the time of their nuptial, the bridegroom was perfectly well-dressed. More to that, Kellin tied up with a slim fit royal blue suit with a flower on his left side of the pocket. Similarly, Katelynne donned a mermaid bridal ball gown with two laces.

Kellin and Katelynne are the parents of a daughter, Copeland Quinn who was born on 18th May 2012, just one year before their marriage. As of now, Copeland turned to seven years old and goes to junior academy school.

Coming upto the pair's social life, Kellin isn't much familiar to share his things, but Katelynne is fond of sharing her daughter's picture on her social media. Likewise, she shared a photo while horse riding with Copeland on 17th November 2019.

Kellin's spouse, Katelynne, also shares two kids, Liam Quinn and Rowan Quinn (born on 10th February 2006), from her previous marriage. Both of their sons are living with Kellin since their wedding ceremony was done.

Kellin and his Sleeping with Sirens band members were once involved in criticism for their tour packages of The Feel This, which was later found polaroid. The announcement of their pre-sale was held on 5th August 2013, where they offered the opportunity to give their signature photo and an interview for minutes at $80.

The selling price of their tour package didn't become successful enough to satisfy other notable musical artists like Oliver Sykes, Brian Calzini, Beau Bokan, and Elliott Gruenberg, who stated the action to sell was wrong. Nevertheless, only the founder of Falling in Reverse band, Ronnie Radke supported in Kellin's favor.

After facing criticisms for several weeks, they announced that the collected money from their tour package would be used to pay bills of a 16-year-old cancer patient, Antonio. They later raised $10,000 of their revenue from their record sales.

Kellin Quinn has a net worth of $2 Million as of 2019. On the other hand, he makes impressive earnings from his record sales. According to Indeed, a musician gets an average income of $42,561 in a year in the United States. So, his wealth might be similar to the earnings of an American musician.

Quinn frequently appears in the musical fantasy drama series, Paradise City alongside Emma G. Kingsley, Perrey Reeves, and Rhys Coiro, among others. The show gained much popularity while doing episodes with Kellin, which received excellent views as well. Likewise, Elizabeth Day also starred on the show.

Lives with an English Bulldog

The rock musician, Quinn is an animal lover and adores to live with an English Bulldog. His wife shared a picture of Kellin and their dog hugging on 6th October 2018 via Instagram.

Currently, the price of an English Bulldog puppy costs between $1,500 and $3,000. Small bulldog is much expensive than an adult bulldog because they're delivered by cesarean section, and their heads are quite smaller for the mother bulldog to give natural delivery. Just like Kellin, Ali Turiano is also an avid animal lover.