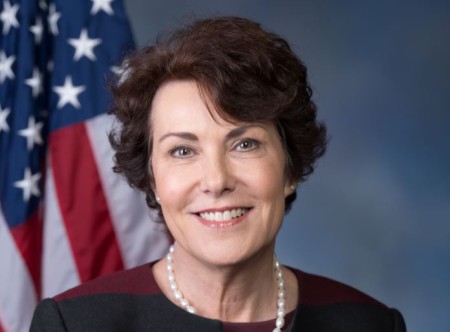 Jacky Rosen is an American Politician who began serving as the junior United States Senator from Nevada since 2019. Previously, she served in the U.S Representative for Nevada's 3rd congressional district from 2017-2019. She is the 37th freshman member of the U.S House of Representatives to win a seat in the Senate.

Jacklyn Sheryl Rosen was born on August 2, 1957, in Chicago, Illinois, the U.S. to parents, Carol (mother), and Leonard Spektor (father). Her mother was a housewife, while her father was a car dealership owner who had served in the U.S. Army during the Korean War. Rosen graduated with a Bachelor's in psychology from the University of Minnesota in 1979. Jacky and her husband are Jewish.

Th 63-year-old, Jacky Rosen is married to her longtime husband, Larry Rosen. The couple exchanged their wedding vows in September 1993 in a small beautiful ceremony. Jacky and Larry have been married for nearly 27 years as of 2020.

Jacky's husband, Larry, is a radiologist who graduated with a medical degree from UCLA School of Dentistry. The couple has a daughter named, Miranda Rosen born in 1995. She graduated from the University of Sussex with a major in Contemporary History.

To date, Jacky and her husband haven't been involved in any controversy. Although Jacky has a busy schedule, she manages her time to spend as much time with her family. Additionally, Larry also supports his wife. The family of three currently resides in Henderson, Nevada.

Unlike Jacky, another junior U.S senator, Joni Ernst survived domestic violence. Even though she was a combat veteran, Joni's husband used to abuse her mentally and physically.

The current junior U.S. Senator from Nevada, Jacky Rosen, has a net worth of $1.5 million which is similar to Arizona's junior senator, Martha McSally. She makes an annual salary of over $154,000 and receives an additional $100,000, including bonuses and expenses.

The yearly salary for the United States senators ranges somewhere between $145,000-$187,000. As she previously served in the 3rd congressional district for two years, Rosen earned around $121,000 per year.

Do you know before entering into politics, Rosen even worked as a waitress? After graduating, Jacky moved with her family to Las Vegas. She worked summers as a waitress at Caesar's palace throughout the 1980s. Later, she opened her own consulting business.

Jacky's candidacy was announced on July 5, 2017, and was endorsed by former President Barack Obama and former Vice President, Joe Biden. She was elected as the junior Senator of Nevada on November 6, 2018.

She is the only freshman of the U.S House of Representatives who won a seat in the U.S Senate during the midterm elections.

In March 2019, Rosen helped introduce the equality act in the Senate, and she also cosponsored the Fair Housing and Equity Act.

Jacky helped reintroduce the Rebuild America's Schools of Act of 2019. The act would allocate an investment of $100 billion for school infrastructure-projects, a $70 billion grant program, and a $30 billion tax credit bond program.