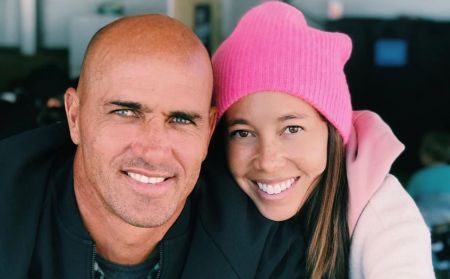 If you're looking for getting into a relationship and finding love with someone special, you need to have enough compassion to treat your bond worthy like it is the most important thing in the world. Just like the longtime couple, Kelly Slater and Kalani Miller, who fall in love in a trustworthy relationship for more than a decade.

Apart from the media's eyes, the love birds enjoy surfing on the beaches, playing guitar and composing sonnets in their free time. So, the couple are married now or still living in their romantic relationship? Let's find out more about the couple's personal life.

The 47-year-old surfer, Kelly isn't married to Kalani Miller, but they're dating for more than 12 years after their first meeting in 2007. More to this, Kalani shared a post on Instagram, where the couple is celebrating their 12th happy anniversary on 24th September 2019.

Back in 2019, some media tabloids spread rumors of Slater and Miller's engagement and planning to get married soon. Nevertheless, the rumors turned out to be fake when the two stated they aren't engaged as of now.

The adventurous couple is enjoying their love life while enjoying each other's company. They love to spend time on beautiful beaches and surfing in Cocoa Beach, Florida, and Hawaii island in the pacific ocean. Kalani also supports Slater while he is playing on the ASP World Tour.

The lovely pair were seen surfing at The Kelly Slater Wave Company surf ranch located in Lemoore, California on 2nd November 2019. Kalani also posted a picture while having dinner with Slater via Instagram on 26th January 2020. Other than that, they also enjoy traveling to exotic places while meeting new faces.

Slater's Life Before the Other-half Kalani

The 11-time promising world surfing champion, Slater dated many high profile women like actresses and models. He first started dating a Canadian-American actress, Pamela Anderson in 1998, after he met her on the set of Baywatch during the period of the 1990s. Their relationship only lasted for two years after they split up in 2000.

After staying single for five years, Kelly then began dating a Brazilian model, Gisele Bundchen in 2005. The duo separated shortly a year later due to some misunderstandings in 2006.

Kelly was also involved in a brief relationship with Cameron Diaz in 2007, but their affair didn't last long because of some reason. He also shares a daughter, Taylor Slater (born in June 1996) with his ex-girlfriend, Tamara.