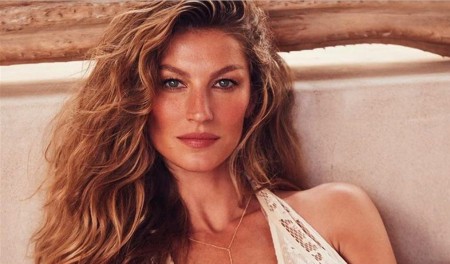 Brazilian supermodel, Gisele Bundchen is widely-recognized by her modeling work for the world's leading womenswear and beauty products company, Victoria's Secret Angel. According to Forbes, her name was listed 89th in the "Most Powerful Woman in the World" and the "16th Wealthiest Woman in the Field of Modelling". She is also famous for her runway walk, which often called The Horsewalk or The Stomp in the fashion world.

The supermodel, Bundchen is committed to an American football quarterback, Tom Brady, who's currently playing for the New England Patriots. They first walked down the aisle on 26th February 2009 at St. Monica Catholic Church, Santa Monica, CA.

A few months after the nuptials, the duo again tied the knot in Costa Rica in April 2009, which was a small ceremony. At the time of their wedding, the bride donned an ivory strapless gown with a trumpet skirt and long train designated by Dolce & Gabbana. On the other side, the groom wore a slim fit royal black tuxedo with a rose on his left pocket.

Shortly, the pair spend the most joyful moment in their marriage. Furthermore, they recently celebrated their 10th marriage anniversary in 2019 at their home.

How The Beautiful Couple Met?

Gisele and Brady had their first encounter on a blind date organized by their mutual friend in 2006. At that time, the duo had a sweet conversation, but Bundchen said she don't want to date right now because she has to do more with her modeling career.

Shortly after the first interaction, the two eventually became friends and further began dating just before a day of Christmas Eve in December 2006. After dating for two years, Brady got a marriage proposal for Bundchen, and happily, she accepted the proposal saying, "Yes" to Tom on 26th February 2009. Since after, the rest became history.

The couple is the parents of two kids. Firstly, the duo welcomed their first son, Benjamin Rain Brady, on 8th December 2009, who's now ten years old. At the age of 29, Gisele gave birth to Benjamin.

After the birth of their first child, they proclaimed that they're going to share their second child. Fortunately, Bundchen gave birth to their second baby daughter, Vivian Lake Brady, on 5th December 2012. During that period, Gisele was 32 years old.

Gisele is also the step-mother of John Edward Thomas Moynahan, who was born on 27th August 2007 at St. John's Health Center situated in Santa Monica, California. Previously, Bundchen's husband had an affair with an actress, Bridget Moynahan, from 2004 to 2006, form which they produced a baby boy, John.

Brazilian supermodel, Gisele was once involved in a blissful relationship with an Oscar Award-winning actor, Leonardo DiCaprio. The two met for the first time in 2000, and after that, they began dating for a while.

At the time when the couple was dating, Gisele secretly dated Rico Mansur, who's a Brazilian businessman and polo player in 2002. Meanwhile, Bundchen and DiCaprio anonymously visited a popular Brazilian Indian restaurant, Xingu, and also featured in the cover of People's Most Beautiful List in 2004. Unfortunately, they separated later due to some personal conflict in 2005.

Upon their separation, Bundchen started dating an American professional surfer, Kelly Slater, in 2005. But, their relationship didn't work well, and they broke up in 2006. She also linked into an affair with Scott Barnhill and Josh Hartnett.

The Former Victoria's Secret Model is a Millionaire

Gisele Bundchen's net worth is $250 Million as of 2019 and is the 2nd wealthiest supermodels in the world reported by Business Insider. Back in 2017, she collected total earnings of $10 Million and $30.5 Million in 2016.

Check out the trailer of Taxi

As an actress, Bundchen featured in her debut movie, Taxi (2004), which garnered a total of $68.9 Million with $25 Million production budget. In return, she received a payroll of $1.8 Million from the film's success. She also earned $350,000 from her portrayal of Serena in the comedy-drama movie; The Devil Wears Prada (2006).

The supermodel, Bundchen is actively participated in various charitable activities and donates 10% of her income to the underprivileged communities and needy people. On 30th March 2003, she raised $150,000 for Brazil's Zero Hunger program.

Gisele further listed a collection of diamonds to a non-profit organization, Diamond Empowerment Fund, to provide quality education to the needy people all over the world in 2008. The collective of diamonds shown the Ponahalo Diamonds (valued $2 Million to $4 Million), a 6-carat diamond ring (worth $120,000-$150,000) and a 3.35-carat Sabbadini diamond ring (estimated $15,000-$20,000).

On 15th January 2010, when the earthquake devastation occurred in Haiti, she raised $1.5 Million to the Red Cross to make an effort of relief to the victims of nature. For her promising work, she received honor and listed #14 on The Giving Back Fund's list of 30 celebrities who donated to charity in 2011.

Resides in a Million Dollar House

Bundchen and her husband, Brady are living in a 14,000 square feet accommodation located in Los Angeles, California. Their house features six bedrooms, five and a half bathrooms, two fireplaces, a fully furnished kitchen, and a large swimming pool.

The pair previously bought a house in Brookline, Massachusetts, for $4.5 Million in 2013 but later sold out their rooftop at $39.6 Million. Their former home consists of five bedrooms, five full and two half bathrooms, based on 2,400 square feet.

Author of Lessons: My Path to a Meaningful Life

The promising model, Bundchen wrote and published a book, Lessons: My Path to a Meaningful Life on 2nd October 2018. In the book, she narrates her personal experience, life lessons, and beautiful memories with her beloved ones.