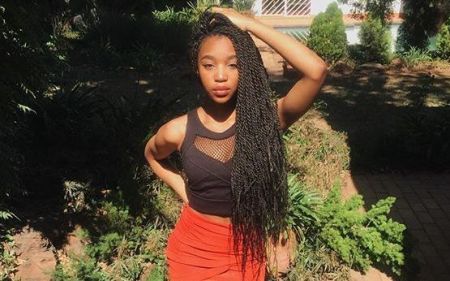 Netflix's second African series, Blood and Water, has been storming the audiences with its unique story plot. The show also has launched some new actors whose work is impeccable. Among them, Khosi Ngema is a South African actress who debuted with the role of Fikile Bhele on Blood and Water. Khosi is represented by Louis B Models Management.

Khosi was born on November 2, 2000, in Gauteng Province of South Africa. Her parents separated a long time ago. Her father, Mangaliso Ngema, is a renowned actor, singer, composer, and filmmaker. Likewise, Khosi has four paternal step-siblings, Swazi, Unathi, Busani, and Mpange. Mangaliso is married to his wife of 13 years named, Busisiwe.

Does Khosi Ngema has a Boyfriend?

The 19-year-old actress is currently in a romantic relationship with her boyfriend, Jean-Luc Goodall. The couple has been dating for three years as of now. Both Khosi and her partner are too young to get married, but in the future, the couple might tie their wedding knot.

Ngema often praises for her boyfriend's support, care, and love. The adorable couple can be seen traveling to exotic places, enjoying with friends, and partying. On July 31, 2020, Khosi shared an Instagram post, where she called her boyfriend as her best friend for life.

At present, Khosi is probably focused on expanding her acting career. She is a singer and a songwriter as well. It seems her romantic relationship has brought her even more joy. Another South African actress and her co-star from Blood and Water, Greteli Fincham, also has a boyfriend.

One of the rising South African actress, Khosi Ngema has a net worth of $150,000 as of 2020. She earns a decent income from her acting and singing career. In a short time, Khosi has appeared in popular tv series. The average salary for a television actress in South Africa ranges somewhere between $18,000-$43,564. Therefore she might be paid in a similar manner.

Ngema earns additional wealth from different endorsements and sponsorships. Although she has yet to establish her name in the movie industry, Ngema is trying to make a name on television at present. Further, her co-stars from Blood and Water like Shamilla Miller and Ama Qamata holds a decent net worth.

Debuted in a Major Role

Khosi, who bagged the role of Fikile Bhele on Netflix's original series, is determined to take the industry by storm. From a young age, she wanted to become a singer and actress. The 5 feet 5-inch tall actress received wide applaud for her debut performance.

Further, Khosi is considered as one of the talented young artists in South Africa. Although she hasn't appeared in movies, Ngema is hopeful that one day her career will expand. Talking about her social media presence, Ngema has 220k followers on Instagram, 14k followers on Twitter, and nearly 1.5k followers on Facebook.