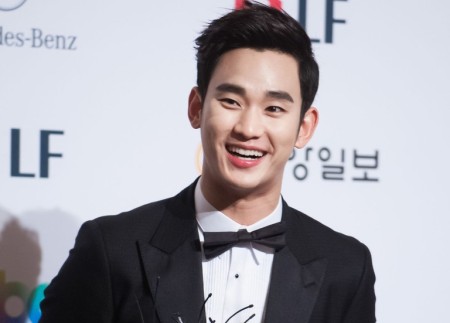 Kim Soo-Hyun is a South Korean actor who has become one of the most bankable and popular stars in a short amount of time. He went on to become an international heartthrob after appearing in the television series like Dream High, Moon Embracing the Sun, The Producers, etc. Similarly, Kim has also worked in movies such as The Thieves, Real, etc.

Kim was born on February 16, 1988, in Seoul, South Korea. He is 32 years old as of 2020. As he gained success through television, Soo-Hyun is now a top Hallyu star in Asia. A bowling enthusiast, Kim completed his mandatory military service in July 2019.

How was Kim's childhood?

Kim was born to father Kim Chung-hoon, who was the lead singer of the 80's band "Seven Dolphins." As a child, Kim was shy and introverted, so his mother encouraged him to take acting classes at high school. Later, he enrolled at Chung-Ang University's Film and Theater Department in 2009.

Kim mostly lived with his mother, as his parents got divorced when he was young. In 2015, he learned that he has a paternal half-sister named Kim Ju-na. The 26-year-old Ju-na is a singer who became famous after participating in the talent show Produce 101. Similarly, Soo-Hyun has a cousin named Lee Sa-rang, who directed him in the film Real.

Is Kim Soo-Hyun dating anyone?

With a height of 1.8m and irresistible looks, Kim can make any girl fall in love with him. However, it is hard to believe that this young actor doesn't have a girlfriend, and he is still not married. For Kim, being single seems tough as he is constantly linked up with his co-stars and other female celebrities.

In mid-2010, a false rumor spread about Kim Soo-Hyun wanting to get married to Ahn So-hee, a former member of the Wonder Girls group. Also, Kim was said to be dating Girls Generation's Yoona in 2012. Further, he has been linked up with Nana, Suzy, and several other women.

When asked about marriage, Kim revealed that he would probably get married in his early 40s. As of now, he is not bothered due to his singlehood. In 2019, he made a cameo in Hotel Del Luna along with Park Jin-Joo, a lovely actress who is also single.

The popular South Koren Actor Kim Soo-Hyun is probably the highest-paid actor right now. He is everywhere, from television to movies, commercials to cameos, etc. As per reports, Soo-Hyun's net worth is said to be over $110 million (USD). He made his fortune mostly from acting, endorsements, and other ventures. Another popular actor, Lee Min Ho, also has a decent net worth.

In early 2010, Kim reportedly received over $500,000 as a salary and bought a new home for his family. After the success of Moon Embracing the Sun, Kim's earnings from commercials alone were over $6 million. In 2014, MBC's Section TV Entertainment Relay stated Kim's net worth around $25 million. Since then, his wealth has been increasing rapidly.

Talking about Soo-Hyun's popularity, the Forbes Korea Power Celebrity listed him fourth, second, and fifth in 2013, 2015, and 2016 respectively. Furthermore, the business magazine's Asia edition listed him in its under 30 in 2016. Well, Kim is a Hallyu star, which means he is a leading figure in Korean Pop culture exports and advertisements.