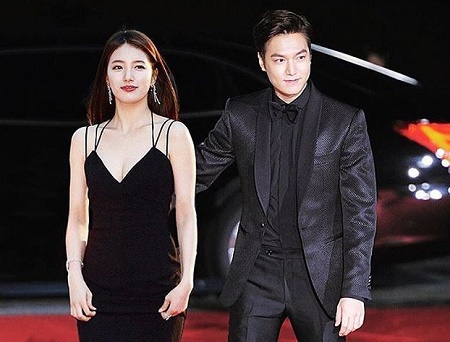 Celebrities have a number of romantic affairs, flings before setting off for their life's true love. And their relationship is making fodder for columns of gossip. South Korean actor Lee Min Ho and actress, Bae Suzy who made headlines because of their off and on the long partnership.

Lee Min and Bae had gone their separate ways in 2017, after dating for nearly three years. But sources suggested they have recently started dating privately again. So, in this post, let us find out more about their current affairs.

Are Lee and Suzy Ongoing Again?

The failed relationship of Min Ho and Bae may have happened two years ago, but the fans are still said that they are in a relationship. Further reports claim that Legend Of The Blue Sea's actor and While You Were Sleeping's actress continue to meet each other.

However, Lee's Agency MYM Entertainment dismissed the rumors and explained: "After checking with him, It is not true that Lee is back together with his ex-girlfriend, Suzzy. It is also absolutely not true that they went on a date together".

Similarly, Suzy's JYP entertainment agency also clarified: " We have checked with her and its not true that they are dating again". Further, an Ilgan Sports mentioned a source as saying the pair broke up for "personal" reasons and remained friends.

This is, therefore, merely a speculation that the media has no evidence from both sides. Boys Over Flowers' actor is still enlisting in the military, according to Enews, though Suzy is now very busy with her thick commercial and shooting schedules. We can see that they don't have plenty of time to see each other, which has made them far apart.

Their Secret Romance and Break Up

32, Lee and Bae, 25, confirmed their relationship in London on 22 March 2015 after photographs of them. It was also confirmed that on March 25 the pair had left Korea from the Incheon Airport together and stayed at a London hotel for 3 days during their secret vacation.

After a celebration of one year of love, the exes began wearing couple rings in March 2016. They also arranged a two-year anniversary party for their close friends in Seoul. On 16 November 2017, their agencies publicly announced the break-up news from Suzy and Lee Min Ho in the morning after nearly three years of being together.

The reason Lin Ho and Bae broke up until now has been unclear. Nevertheless, the couple's agencies have confirmed that they had broken up because they were too busy to see each other. After the seperation, the former member of the girl group Miss A, Suzy is then started dating Goblin star Lee Dong Wook

Their relationship also has come to an end. On the other hand, Lee Min Ho is still single, and it seems like he is still too busy to pursue a career.