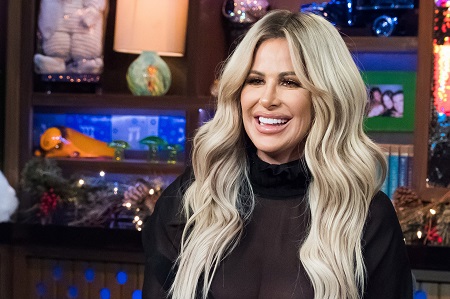 Kim Zolciak-Biermann is an American television personality and singer who rose to fame being the cast member of reality TV series The Real Housewives of Atlanta from 2008 to 2020. In addition, she has also starred on her own spin-off show titled Don't Be Tardy since April 26, 2012.

Kimberleigh Marie Zolciak was born on May 19, 1978, in Pensacola, Florida, United States. Her parents are Joe Zolciak and Karen Zolciak. Further, she has one brother whose name is Michael. She holds American citizenship and is of Polish and Italian descent. For her education, she received her nursing degree from the University of Connecticut in 1996.

The 42 years old Kim has been happily married to her partner, Kroy Biermann  (born September 12, 1985) for eight years. He is a retired football defensive end and outside linebacker who was selected in the 5th round of the 2008 NFL Draft by the Atlanta Falcons.

Kimberleigh met her future partner Kroy at the charity event of Dancing Stars Of Atlanta in May 2010. Likewise, their first meeting was shown on The Real Housewives of Atlanta's third season. That same year, the two started dating and dedicated to getting married.

On November 11, 2011, the lovebirds walked down the wedding aisle at the private ceremony. Their big day was held among their loved ones at their Roswell, Georgia, house. Since the, they are sparking their blissful conjual relationship with no sign of divorce.

How Many Children Does She have?

Altogether, the 1.75 m tall reality TV star has six beautiful kids. Kim Zolciak and her spouse Kroy, 34, welcome their firstborn son Kroy Jagger Biermann, Jr. on May 31, 2011, before their marriage.

After their wedding, Kim got pregnant with her second child with Biermann. And  August 15, 2012, they welcomed another bundle of joy or son Kash Kade Biermann. On November 25, 2013, their twins, a daughter Kaia Rose Biermann and a son, Kane Ren Biermann were born.

In addition, Marie Zolciak also two daughters from her previous relationship. They are Brielle Karenna (born February 25, 1997) and Ariana Lenee (born October 17, 2001).  However, there is no information about her daughter's Brielle dad. Some sources speculated that her ex-lover or daughter of the father is her sweetheart from high school, John Macdougald.

In July 2013,  the football star Kroy legally adopted Kim's kids. Then the girls Ariana, 18, and Brielle, 23, changed their name to Biermann.

Her First Husband is Daniel Toce

Yes, you have read it correctly. Her first marriage was with her ex-husband, Daniel Toce. The Bravo television personality Biermann and Daniel got hitched on 24 September 2001. Their private ceremony took place in Destin, Florida on a beach in the presence of family and friends.

But due to their personal issues, they decided not to continue their marital life. On August 19, 2001,  they got divorced after being together for more than three years. From their union, they had one daughter Brielle.

Apart from that, Zolciak-Biermann who is bisexual also dated an American DJ, Tracy Young, now 49 years.

What is Kim Zolciak-Biermann's net worth?

As of July 2020, Kim Zolciak-Biermann has a staggering net worth of $3 Millon. She has accumulated her fortune throughout her thriving career as a reality television personality and singer. Ariana Biermann is the cast member of The Real Housewives of Atlanta with $1 Million worth.

As far as her salary, Zolciak reportedly making a salary about $125,000 per episode of Don't Be Tardy. In addition, her 2009's single Don't Be Tardy for the Party peaked #3 on the iTunes Dance Chart. Similarly, she is the owner of luxury beauty and lifestyle brand, Kashmere, which was launched in 2016.