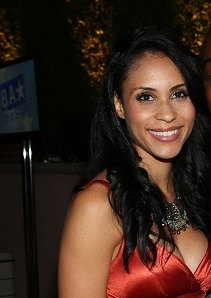 Kori Campfield is recognized as the wife of professional Ghanaian-American wrestler Kofi Kingston, now 38. Her husband Kingston is signed WWE under the ring name Kofi Kingston and performing on the brand SmackDown.

The celebrity wife, Kori was born on 21 April 1982, in Accra, Ghana. Born in Ghana, she holds Ghanaian nationality but ethnicity is not known. Because of her low key nature, there is no information about her parents or family background to the media.

How long Kori and Kofi are Married?

And it's been a decade that this long term couple is living happily. The married couple, as of now, sharing a very strong and healthy marital bond. So far, there have never been reports on social media about divorce or extra-marital affairs of them.

In the year 2010 on the 11th of September, Campfield, and Kingston, 38, tied the knot at a private ceremony. Their wedding ceremony was held in front of their close family and friends only. Recently, the two have completed their nine years of togetherness.

From their marriage, the couple is blessed with two youngsters. Their first child, a baby boy, Khi was born in 2013. And after 3 years of firstborn, they gave birth to their second son Orion in April 2016.

The Net Worth of Kori Campfield

Currently, most people just know Kori Campfield as the WWE Champion's wife, Kofi. She is a housewife and is not involved in any career so there is no chance to earns money.  Similarly, the income of another celebrity wife, Michelle Rubio, is still private.

However, her husband Kofi Kingston, a Ghanaian-American professional wrestler who maintains a net worth of $3 million as of 2020. He accumulated that fortune over a successful career in wrestling. Additionally, the 6-feet tall wrestler recently signed a five-year WWE contract. Thum, his earnings fell in around $500,000 a year.

A Little Sneak about on her Husband, Kofi

As we all know, Kingston is recognized for his high flying movements under the Word Wrestling Entertainment (WWE). Born and raised in Ghana, he is now WWE Champion and appears on the SmackDown. On top of his career accomplishments, the title as champion WWE makes him the first African-born WWE Champion in history.

The Ghana wrestler began his professional career in 2005. He was drafted in 2008 under the Raw Brand into the WWE Main roster. He spent much of his early years battling for the Intercontinental Champion, U.S. Title and Tag Team Champion in the mid-card single scenes at WWE.