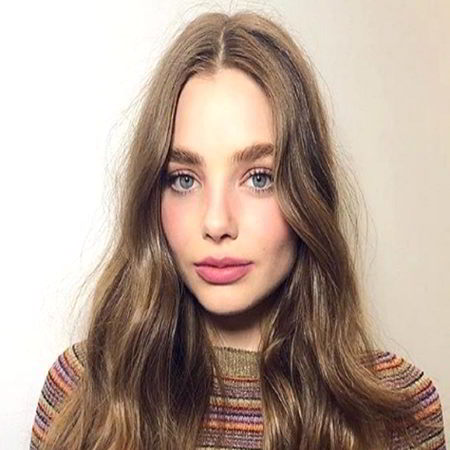 Kristine Froseth is an American-Norwegian actress and model. Moreover, she is best known for playing Kelly Aldrich in the Netflix series, The Society aired on May 10, 2019. Apart, she is also famous for her acting as an Alaska Yong in the Hulu series Looking for Alaska. Furthermore, Kristine also worked in many films and TV shows like Rebel in the Rye(2017), Prey(2019), Low Tide(2019), The Assistant(2019), and so on.

Netflix's mystery teen drama The Society, Kristine Froseth was born on September 21, 1996, in New Jersey, USA. However, her parents are Norwegian who moved to New Jersey from Oslo, Norway due to her father's work. Moreover, she holds a Norwegian-American nationality and belongs to white ethnicity. Besides, we don't have much information about her parents', siblings', and educational details yet.

Talking about personal life, Kristine, 23, is currently enjoying her happy single life. As we don't have any news about her boyfriend or affairs until now. Currently, she is fully focused on her career building rather than being any kind of affairs and relationship. Furthermore, she is far away from any kind of rumor and controversy.

Nevertheless, Kristine is of the most eligible bachelor who might have grabbed the attention of many youths. Moreover, Froseth enjoys her free time with her family and friend by going on vacation and hanging out. Kristine is a model and loves to travels to a new place for her works. As of now, she is just enjoying her single life with her family.

How Much Is The Net Worth Of Kristine Froseth?

Well, Kristine has amassed a decent amount of fortune from her career as an actress and model. Furthermore, she has an estimated net worth of around $400,000 as of 2020. She might earn around $50,000-$60,000, an average annual salary as an actress.

On the other hand, Froseth started her career as a model so, the average salary of the model is around $54,000 per year. Apart, she has an Instagram account @kristine_froseth with 1.2 million followers. So, she might earn around $4,000 per post on Instagram. She is living a happy and wealthy life with her family right now.

The 170 cm tall, Kristine developed her interest in catwalk when she auditions at Ski Storsenter in Norway and was also scouted by IMG Models while in New Jersey at a local mall fashion show. Moreover, Froseth has done modeling for many brands like Armani, Juicy Couture, Miu Miu, and H&M. However, her acting started in 2016, when she appeared in the music video, False Alarm.

Nevertheless, her Hollywood career started from Rebel in the Rye and Let the Right One In, in 2017. However, she rose to fame after appearing in the Netflix's teen drama series, The Society along with Kathryn Newton, Olivia DeJonge, Gideon Adlon, Rachel Keller, Natasha Liu Bordizzo, and so on. Apart, she is also popular for her acting on Prey(2019), Looking for Alaska(2019), The Assistant(2019), and many others.