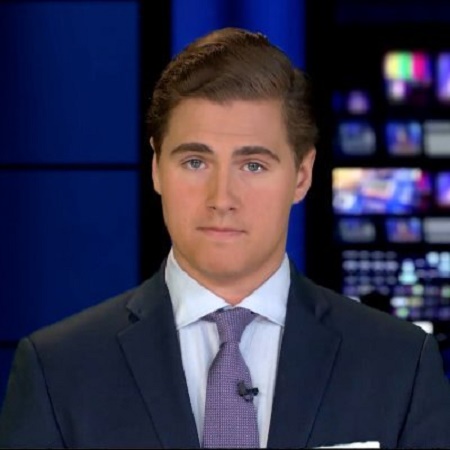 Not everyone born with a silver spoon in their mouth, there are only a few fortunate, and Kyle Wellner is one of the lucky celebrity kids who was born to popular parents. He is in the limelight since his birth.

Wellnerwas born in 1995 as a second child to the Emmy award winner mother, Deborah Norville, andbusinessman father, Karl Wellner in the United States. Aged 24 Kyle also played football on the Blue Devil's team as a safety.

Is Kyle Wellner Currently Dating Anyone?

Despite being a celebrity kid, Kyle Wellner has kept most of his personal details under the wraps and prefers low key. Thus, Wellner is now living single happy life to the fullest.

On the other hand, Kyle's parents are happily married for over three decades. The marital life of the couple is still smooth as silk, and day by day the bond is growing stronger and better

In fact, the couple never faced up to date with or dragged into any kind of divorce issues. Further, it clearly reflects the joy of their married life.

Karl and Deborah shared their wedding vows on 12 December 1987 at St. James Episcopal Church, in New York. The wedding was an intimate yet lavishing ceremony held among their beloved ones.

The couple engaged after four months of dating in 1985. Moreover, Karl's proposed twice to his now-wife, once in a New York City sandwich shop, and again while in Brazil and both the times Deborah's answer was yes.

The two-time Emmy winner and the native of Sweden's love story started after the blind date, which was set by Norville's family members and relatives. The couple first met in 1985, according to Chicago Tribune. She, however, already learned of Wellner while visiting relatives in Sweden.

Now, she thanked her relatives because the planned blind date of the family leads the successful marital life of Norville and Wellner. As of now, the happy couple shared three children; two sons, Nick, 28 and Kyle, 24 and a daughter, Mikaela, 21.

Kyle Wellner is the middle child of his parents and blessed with two siblings. His elder brother, Nick Wellner, was born in 1991, and younger sister Mikaela Wellner was born in 1998. Interestingly, the three siblings chose to attend the same school at Duke University.

Older brother Nick graduated in 2013 from Duke and worked as the Rugby club team's captain. Likewise, Mikaela is now a junior, attending with her mom the famous NCAA basketball games of the universities.

Parents' (Deborah and Karl) Net Worth

Born to rich parents, Kyle Wellner is living a lavish lifestyle under his parent's fortune. Whereas his father Karl Wellner's net worth is around $40 million as of 2019. Well, he is a businessman and CEO of Papamarkou, an international wealth management firm for elite clients.

On the other hand, mother Deborah Anne Norville is an American TV personality and businesswoman who has a net worth of $18 million. Most of her wealth comes from her long winding career in journalism and writing. Moreover, her salary is $4 million.

Besides, Norville also owns a knitted collections business and also endorsed some creams and lotions for anti-aging, giving her some better earnings.