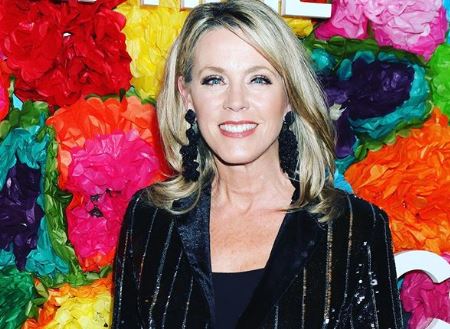 The 61-year-old Deborah Norville is an American television journalist and businesswoman who is working as the anchor of Inside Editon, a syndicated television news magazine since 1995. Additionally, she is the two-time Emmy-award winning journalist and is a member of the board of directors of the Viacom Corporation.

Norville is the founder of Deborah Norville Collection, a line of yarns for those who are eager for knit and crochet. She launched the collection in 2008, and with her career as a journalist and businessperson, she has a net worth of $10 million. Like Norville, Elise Jordan is a journalist and works for a TV magazine.

Deborah Norville is a married woman, and her husband is Swedish businessman, Karl Wellner, her partner for thirty-two years. They tied their marital knot on December 12, 1987, in New York City. For your information, they exchanged their wedding vows in Swedish and English at St. James Episcopal Church, New York City.

The family members introduced the couple or say set up on a blind date. Later, they became engaged after four months. In the time where wealthy personalities go through multiple marriages, Norville and Wellner have stood the test of time by becoming faithful to each other.

The 66-year-old, Karl Wellner is the President and CEO of an international wealth management firm called, 'Papamarkou.' As per Bloomberg, he is also working as the COO, Chairman, and the Director of Papamarkou Wellner Asset Managaement Inc. since 2003. Half of his client base is non-U.S., and half is U.S., wealthy individuals and families.

Also, Wellner is the founder and partner at Kawe Kapital and has worked in several leading positions in the USA. He is fluent in English, Swedish, German, French, Estonian and can speak both Russian and Italian.

Deborah and her spouse had the first encounter at a blind date in 1985 in New York. She had first heard about Wellner while visiting her relatives in Sweden. Likewise, she often says in interviews that if it weren't for her relatives, they probably would never have met.

Four months after the date, Norville and Wellner got engaged. When asked about the engagement, Norville revealed that Wellner proposed her twice, once in a sandwich shop in New York and later in Brazil on a mountaintop.

Despite their high-pressure lives, the couple entirely planned their wedding, and afterward, they went on a three-week honeymoon trip.

The Inside Edition anchor, Mrs. Devorah Norville, and her businessman husband, Karl Wellner, are parents of three children. They share two sons and a daughter, who are all grown up as of 2019.

Their eldest son, Nick(28), graduated from Duke University. Likewise, the second son, Kyle(24), played football on the Blue Devil's team of Duke University as a safety. Further, the third child and only daughter, Mikaela(21), is currently a freshman and attends the schools' popular NCAA basketball games with her mom.

How Much Is Deborah Norville's Net Worth?

Now how much is Norville's exact net worth? Norville is the longest-serving anchor on American television and is working for Inside Edition since 1995. She is a two-time Emmy Award winner, the 2016 inductee of the Broadcasting & Cable Hall of Fame. Hence, her net worth might range between $8 million-$13 million. Fiona Bruce is also one of the highest-paid female journalists.

For Sale: Norville's House Of 17 Years For Sale

In March 2019, Deborah and her husband listed their Park Avenue apartment for sale with a listing price of $4.5 million. The family has been living in the four-bedroom, four-bath co-op for the last 17 years.

She and her husband, Wellner, renovate the 3,000 sq-foot apartment into a primary residence raising their three children and building their career. According to the listing broker, monthly maintenance is $7,632.

Apart from anchoring TV shows, Norville is the founder of Deborah Norville Collection, a line of knit and crochet yarn. She is the best selling author and lecturer. Her book, Thank You Power was a New York Times best-seller, and other notable credits include several self-help books as well as two best-selling children's books.

Norville is one of the board of directors of the Viacom Corporation. She began appearing in commercials for anti-aging creams and lotions in 2008.

Deborah found she has been diagnosed with thyroid cancer after a viewer noticed a lump on Norville's neck. On April 1, 2019, Norville announced that she would be undergoing surgery to remove a cancerous thyroid nodule.

After undergoing successful surgery, she returned to work, and she gave her regards to the concerned fan show spotted a lump on her neck. As of now, Norville is healthy and is active on her profession.

This article aims to give an insight into one of the television's longest-running anchor, Deborah Norville. To be familiar with your favorite idol, follow marriedceleb.