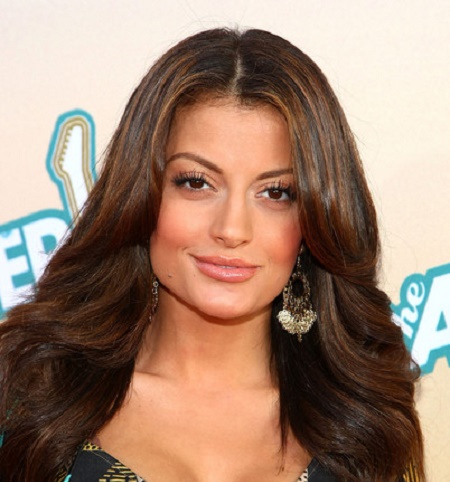 Layla Kayleigh is a British-American TV personality, actress, and philanthropist. She co-hosted America's Best Dance Crew on MTV. Also, she was the co-host of MTV reunion shows like Teen Mom and Teen Wolf.

Kayleigh was born on January 26, 1986, in London, the United Kingdom, as Zara. At the age of 12, her single mother traveled to America in a bid to get US citizenship for them, but she chose to stay in London. Thus, she holds dual British-American citizenship and is of Caucasian ethnicity.

The 5 ft 2 in a tall presenter, Layla married her long term boyfriend, Steven Covino, on October 9, 2011. Her husband is a television personality who currently hosts the show Covino & Rich at 11 am ET/8, a PT on SiriusXM's Faction Talk. Also, he works in Sirius XM Turbo 41 at 5 pm at ESPN.

The couple who got engaged on October 9, 2011, walked down the aisle in Las Vegas in the Graceland Chapel. Their nearly 2-year-old little daughter, Melody, served as a flower girl in Kayleigh and Covino's intimate ceremony.

“I did not expect to be getting married, so I didn’t have a wedding dress. I grabbed a white dress from my suitcase and off to the chapel we went".

Similarly, after coming together, the newlywed couple enjoyed their love affair for four and a half years. Thus this sweet couple has been together for 14 years and happily married for nine years without any sign of divorce.

The marital partners recently celebrated their 9th-anniversary wedding ceremony on October 9, 2019, along with their ten years old daughter. Similarly, another couple, Adam Lind and Lakeyshia, enjoyed their 9th anniversary.

Layla Kayleigh Is Mother Of One Baby Girl

Yes, Best Dance Crew Host and her partner, Covino are proud parents of a baby daughter named Melody Rain Covino, 10,.The couple's daughter Melody, was born on Monday at 7:48 am on November 2, 2009. She weighed 8 lbs and 10 oz during birthtime.

In June, Kayleigh, the 34 years old, revealed its pregnancy. And Steven's show Covino and Rich, the Sirius / Maxim Radio program, was the first to break Melody's birth news.

So far, the mommy Tweeted "On cloud nine. [C]herishing, savoring, taking in every single moment." Furthermore, on March 16, 2009,  Kayleigh announced on an episode of Attack of the Show!,  that she would leave G4 because of her pregnancy and go on an indefinite hiatus to be a stay at home mom.

How Much Layla Kayleigh Net Worth in 2020?

As of early 2020, a British-American TV personality, Layla Kayleigh, has a net worth of $500 thousand, which is close to another TV host, Evy Poumpouras. She earned this amount working as a correspondent and MTV host on American competitive dance reality television series America's Best Dance Crew.

She has hosted many other shows to date, including Attack of the Show, The Best Damn Sports Show Period, The Naked Facts, World poker tour, etc. Further, she has also been featured across other publications, including Maxim Magazine, Gambling.com, King Magazine, and Bluff Magazine.

Additionally, in 2008 Kayleigh ranked No. 33 in AskMen.com's Top 99 Most Attractive Women list. Similarly, she was picked as # 88 on a 2011 AskMen.com-issued Top 99 Women list. In addition to that, she made her big-screen debut as Madison on the 2002 romantic drama film A Simple Promise. Consequently, this shows certainly helped her to make an extra fortune.