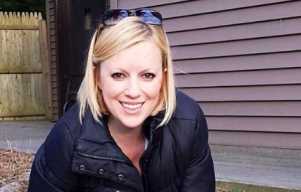 Leanne Lauricella is an American animal activist similar like Keely Shaye. Lauricella left her comfortable and cozy life for the sake of animal rights. Currently, she owns a non-profit organization Goats Anarchy who rescues and rehabilitates disabled and mistreated goats.

Born on 1974, in New York Leanne has done something exceptional which everyone only have a vision of. Besides her charity, she is the author who has written several books for kids. The activist is supported by her loving husband. Who is her spouse? To know read along.

Leanne is having a wonderful marital life with William Lauricella. There is no proper information about how and where this couple first met but, it is reported that the romantic couple tied in a knot in 2011.

It seems like Leanne wants to keep her personal details a bit secret that's why there are no details about her matrimonial life.

Moreover, their relationship started between 2009 - 2010. At that time Leanne worked as a successful event planner whereas her present husband is a famous businessman. Both of them used to live in New York City during those days.

After their marriage, the couple moved to New Jersey and soon to Oxford after adopting a needy goat. Leanne stated that her husband willy is an inspiration for her and he always supports her. Now, If you want to know more about Leanne then keep on scroll just to get a glimpse about her matrimonial event.

Both these couple is out from the spotlight as they are more involved in serving animals. However, scrolling down Leanne Instagram we found that their matrimonial ceremony was traditional.

On a special day, Mrs. Lauricella wore a white gown with a beautiful crown made with beautiful plants. Whereas her husband William arrived in a black suit and tie with plain white shirt. It's been almost a decade of their marriage, so do they share any children?

Does Leanne Lauricella Have A Child?

It's unclear whether the Lauricella couple share a child or not. Both of them never spilled beans about their personal life in front of the public. However, through her Instagram, we can guess that she is a mother.

The above picture must be the daughters of Leanne as she often posts a picture of them on her Instagram. Evidently, their names are still not revealed.

After spending almost a decade with her husband William, the rumors suggest that the love birds might separate. The couple, however, has not made any official report about their divorce.

The reason for their separation is unclear but reports suggest that the choices and decisions of Leanna are offending her husband. Her consistent effort in charity may be affecting her marital life. At the end, these are just rumors circulating around the internet and so far, the duo is blissfully in a married relationship.

How Much Wealth does She Have?

Leanne Lauricella used to earn six-digit salaries while working as a wedding planner. Through her profession, she might've earned between $100,000 to $150,000 per year. However, she probably used most of her revenue in helping the needy animals.

Now she works as an animal activist just like Louise Bale. She is busy with fundraising programs for her charity. Perhaps she is fulfilling her basic need through writing and so far she has published several books.

stay subscribed to Married Celeb for more information on Activist!!!