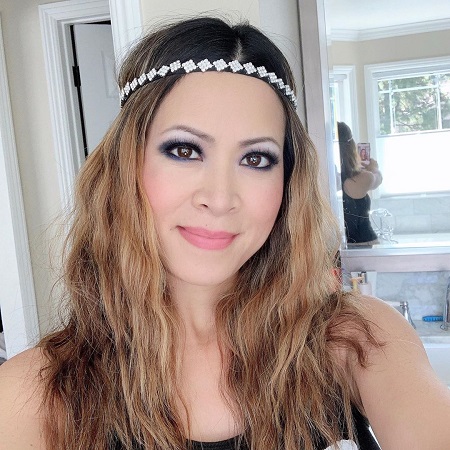 Leyna Nguyen is a three-time Emmy Award-winning American-Vietnamese journalist, retired TV anchor, and reporter. She is best known for her working on CBS2 and KCAL9  in Los Angeles for two decades from 1997 to 2018. Also, she has worked for KCAL-TV in Los Angeles as an anchor at 4 pm and 9 pm.

She was born on December 13, 1969, in Đông Hà, Vietnam. But she moved to the United States in 1975, living in Minnesota. Regarding his education, she studied at Webster University in St. Louis where she earned a degree in Mass Communications. She holds American-Vietnamese citizenship and ethnicity is Asian-American.

She has a Boyfriend

Yes, you have read that correctly. The Vietnamese-American beautiful anchor Leyna, aged, 50, officially off the market. As of now, she is dating her long term beau Kato Kaelin, aged 61. He is an American radio or TV personality who is known as a witness in the O.J. Simpson murder case on June 12, 1994.

The lovebirds started dating since 2013. But they kept their relationship private or away from the limelight for almost four years. In early 2016, the two made their love life public. Since then, the lovely pair starting sharing each other pictures on their respective Instagram account.

Recently on October 21, 2019, Nguyen marked another year of togetherness with her partner, Kato. She posted the kissing snap of the couple at Pink beach komodo island on the Instagram wall. She wrote: " All great beginnings start with an ending, the path to happiness paved in pain. All those moments have to lead me to you and let me love again", with a heart emoji.

It means they have been sparking their love romance for about seven years. But until now, they have talked about their wedding plans on the media.

Who was Leyna Nguyen's Married?

The 5 feet 4 inches tall Nguyen was previously married to her ex-husband, Michael Muriano. They became husband and wife on April 11, 2005, after dating for two years. They first met in 2003.

The two tied the knot in the traditional Vietnamese wedding ceremony among their loved ones.  From their matrimony, they had two children. Their firstborn son Dylan was born on April 29, 2006, while their youngest daughter Kyla was born on July 9, 2008.

However, the thing between them went worst. Then the duo dedicated not to continue their relationship. So they ended their married life secretly. However, there are no further details regarding their divorce in the media.

On the other, Leyna's new beau, Kaelin was also in marital life with his former wife, Cynthia Coulter. They were married in 1983 and divorced in 1989. They had one daughter Tiffany Kaelin Knight.

As of early 2020, Leyna Nguyen has an estimated net worth of $500 thousand. He has accumulated her amount from her journalism as working as a presenter and newscaster. Stephanie Abrams is another journalist with the net value of $5 Million.

Similarly, her salary is valued to be around $61050, which is is the average salary of a news anchor in the United States. To date, she has worked in more than 30 TV shows and films like Two and a Half Men, Boston Legal, Austin Powers, Teenage Mutant Ninja Turtles, and NCIS: Los Angeles.

Also, she has her own non-profit foundation named "Love Across the Ocean". It benefits the underprivileged school kids in Vietnam and supports foreigners in Southern California.

Click on Marriedceleb for more details on American Reporters!!!!