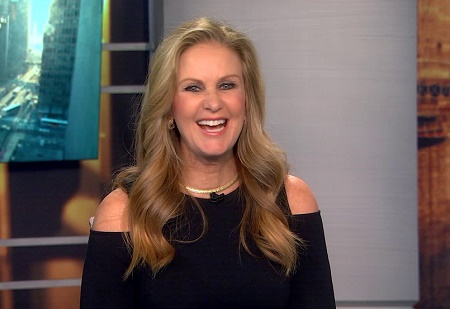 Linda Church is a Former Journalist and Weather Anchor who has been working on the broadcast filed for over two decades. Before her retirement, she had forecast the weather for the Emmy Award-winning PIX11 Morning News since the show 's debut in June 2000.

She was born June 12, 1960, in Los Angeles, California, United States. She holds American citizenship and is of white ethnicity. She completed her graduation from the University of Florida and also attended the University of New Haven.

Was Married Twice with the Same Person, Jim Dolan

Yes, the retired beautiful broadcaster was previously married to the same man not once but twice. He is none other than, Jim Dolan, who is a news reporter who has been associated with WABC-TV 's Eyewitness News in New York City since 1986.

The couple initially tied the knot in the 80s after dating for a while. Likewise, the two first met when Church was working for WABC-TV in New York. During their union, the duo were blessed with two children; one daughter, Colleen Dolan, and one son, Paul Dolan.

But later Linda and her ex-husband, Jim dedicated to ending their marital relationship after being together for several years. And they parted their ways in mutual terms. After their first divorce, they both chose to stay indifferent flats but in the same building in New York. So they reunited and remarried again, but soon afterward they separated.

Since the spilt, the 59 years old meteorologist living a single happy life without any dating rumors. Meanwhile, her Instagram profile shows she utilizes her free time to travel, often with her family, friends, and pet dogs too. Especially, Linda can also be seen spending a lot of time on horse riding.

The Net worth and Earnings of Linda Church

With two decades of television news experience, Linda Church had earned enormous sums of money. Her specific net worth and property information have not been publicly reported to any outlets, but some sources calculate to be around $2 million. Her journalism career as an anchor for news was her main source of income.

During her career, Church has worked for many TV stations including WCBS (New York), WPIX (New York) PIX11, and others. And she might pay off heavy paycheck from $62,000 to $100,000 a year for her duties. Additionally, in 2000 and 2004, she was awarded the National Academy of Television Arts and Sciences and the Best Morning news show.

When Linda Was Retired?

Church who debut her career as a weather anchor at the WCJB-TV in Gainesville, Florida announced her retirement on January 20, 2017. Yes, she says goodbye to her latest station PIX11 after more than two decades of a professional career.

Since the show debut in June 2000, the beloved meteorologist has been forecasting the weather. Likewise, she was the weekend meteorologist at the station from 1990 to 1996, before her early-hour time slot. Before joining PIX11, she was a WPIX Weather Anchor at WNBC-TV in New York from 1987-1990.

Linda worked for WNBC (New York) from 1987 to 1990 alongside anchor Sukanya Krishnan in the Morning News. In addition, she co-hosted the show "Summer Fun for Kids" in June 2003 with former WPIX colleague Mat Garcia, and in July 2007 with Craig Treadway.