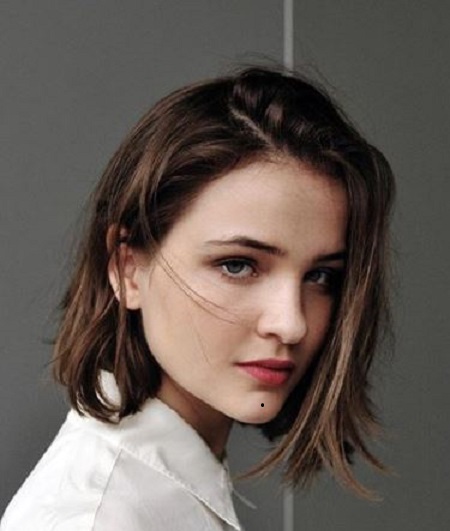 Did you watch the German sci-fi thriller web TV series Dark, that ran from 2017 to 2020? If yes then Lisa Vicari is not a new name for you who starred as the main character of Martha Nielsen in all seasons from 1 to 3. She is a German actress who is also known for starring as the lead role of Isi in a Netflix original movie, Isi & Ossi, which was released on 14 February 2020.

She was born on February 11, 1997, in Munich, Germany. She has a brother whose name is Nicolas Vicari. As per her citizenship, she is German while her ethnicity is not known. For her education, she studied the Improvisational theatre course at the age of 10.

Does Dark's Actress, Lisa Vicari Have a Boyfriend Now?

The 23 years old beautiful actress Lisa is reportedly an unmarried woman so there is no chance of having a husband. At the current time, she has not revealed much information regarding her current love affairs to social media.

Thus, it is still not known whether she is dating anyone or not. It seems Vicari is now living a happy single life without dating her possible boyfriend. Also, she might be waiting for the right person to fall in love. Moreover, she remains quite busy with her work.

She is an active social media user. She keeps uploading photos of her along with her friends and friends visiting different holiday destinations. But until now, she has never posted any romantic images with anyone.

Also, she shared the good chemistry on her recent tv show, Dark next to Louis Hofmann who plays Jonas Kahnwald.

The German actress Lisa actress surely earns a suitable amount of money from her acting career as an actress. As of 2020, her net worth is estimated to be around $400 thousand. Her significant way of earning is her professional acting career.

To date, Vicari has featured in several TV shows, and for her roles. So, she has supposedly accumulated quite a wealth as a bonus or gratuity. As per her salary, she reportedly makes in the range from $22k to 28K per episode.

Asides acting, she is making a few amounts from her endorsement Instagram posts. As of now, she has accumulated more than 1 million Instagram followers. Recently in 2019, she has done the cover photoshoot for Glamour Italia.

Her Movies and TV Shows

However, Vicari came to fame when she landed the main character of Martha Nielsen in TV series, Dark, co-created by Baran bo Odar and Jantje Friese. It was originally released on 1 December 2017 and the 3rd and last season were released on 27 June 2020. The show cast members include Louis Hofmann, Maja Schone, Andreas Pietschmann, Daan Lennard Liebrenz, and others.

Click Marriedceleb, To Know More About Your Favorite Star.