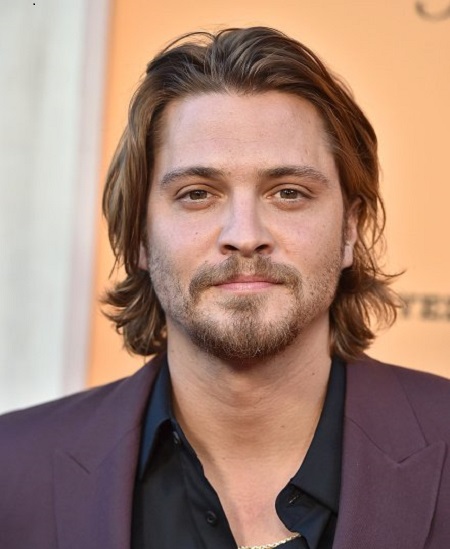 American Actor, Luke Grimes gained immense popularity after appearing as Ryan Lafferty in the ABC drama Brothers & Sisters from 2009 to 2010. Further, he is famous for his recurring characters James in True Blood and is currently starring as Kayce Dutton in Yellowstone. Not only this, but he has also acted in the acclaimed 2014's films American Sniper and Fifty Shades film series.

Luke was born on 21 January 1984 in Dayton, Ohio, the United States as Luke Timothy Grimes. He is the son of a pentecostal pastor, Randy Grimes and Angie Barker. More, he has three siblings. So far, he is a graduate of Dayton Christian High School in 2002. Later after moving to New York City, he studied acting at the American Academy of Dramatic Arts.

What is the Relationship Status of Luke Grimes?

Thirty-Six years old actor, Luke is a happily married man. He tied the knot with his wife, Bianca Rodrigues Grimes, an model in 2018. But when it comes to revealing his personal life, he has not shared any glimpse of his married life as he loves to keep it all to himself.

Because of his secretive nature, further information regarding their love history is still unknown to the media. But the couple must be enjoying their marital relationship privately for two years. And there is no rumour of their separation. Now, they reside in their home town New York City.

Before marrying Bianca, the 1.83 m tall low key star once committed with his former girlfriend, Gillian Zinser, in 2011. She is an actress who is famous for her role Ivy Sullivan in series “90210”.

However, after dating for nearly four years, they parted their ways in 2015, as per online tabloids. But both parties never accept their relationship publically. Apart, he has been in an on-screen matchup with True Blood's co-star, Deborah Ann Woll.

Since beginning his career in 2006, Luke Grimes has been making a huge amount of fortune. As of 2020, his net worth is expected more than $500 thousand, earned throughout his acting work in various movies and television series.

Meanwhile, the actor/actress makes an average salary of $50307, in the United States. Well, Grimes is active in the entertainment industry for 13 years so his annual wage is valued at $60000 per annum. His portrayed Clint Eastwood's film American Sniper has grossed of over $547 Million on the budget of $59 Million in 2014.

How Many TV Shows and Movies Luke Has Appeared in?

Throughout his entire acting career, Grimes has performed in over two dozens of films and shows altogether. He made his film debut with the film All the Boys Love Mandy Lane in 2006.

Since then, he has starred on various movies such as War Eagle, Taken 2, American Sniper, War Eagle, The Magnificent Seven, Shangri-La Suite, and El Camino Christmas, among others. On the other hand, he made his TV series debut by acting as Ryan Lafferty on ABC drama Brothers & Sisters from 2009–2010.

In 2013, Luke played the character Eli Larken in Outlaw Country, and as James in True Blood in 2013. At present, he stars as Kayce Dutton, the son of Kevin Costner’s John Dutton on Yellowstone. It plays the role since season one of the drama series, which first premiered in 2018.