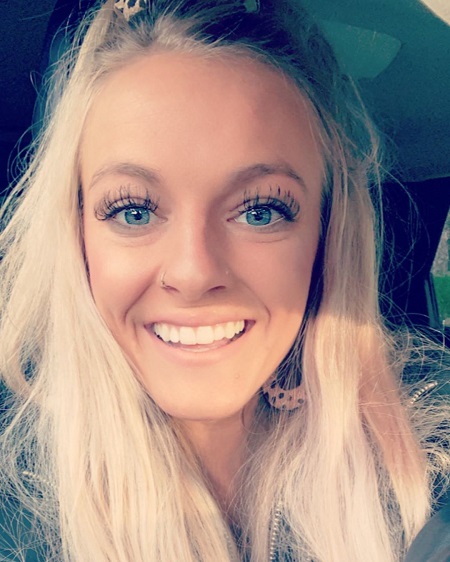 Mackenzie McKee is an American reality TV personality who achieved initial fame after starring on MTV's reality television series 16 and Pregnant in 2011. Also, she is known as the cast member of the spin-off series Teen Mom 3 and Teen Mom OG.

She was born on October 17, 1994, in Miami, Oklahoma, the United States as Mackenzie Douthit. Her parents are Brad Douthit and Angie Douthit who died on December 9, 2019, due to brain cancer. So far, she holds American citizenship and is of white ethnicity.

Who is Mackenzie McKee Married to?

The Reality TV star Mackenzie is married to her high school sweetheart. He is none other than Josh McKee. They said "I do" on  Saturday, August 17, 2013, in a romantic country-themed wedding.

Their nuptials took place in Pittsburg, Kansas at The Barn at Timber. Their function was attended by more than 200 guests including six groomsmen and six bridesmaids. Mackenzie's best friend Cayla Bowman served as maid of honor, while Josh's own brother Caleb taken the role of best man.

In their big day, the bride McKee dressed a rhinestone-studded white corset gown with a tussled. The groom Jose donned in a suede shirt, wrangler jeans, and a white cowboy hat. Everything was so fine and beautiful. Until their wedding, they had a love affair for three-and-a-half years. Thus, they have been dating since 2009.

The Cheating Rumors and Reunited

Mackenzie, 25, revealed in August 2019 that she was separating from her husband McKee. When she accused him of cheating on her with her own cousin then they knew they were no longer being comfortable with each other.

The reality star claimed that he began an affair with her 'close cousin named Ashley right after her mother's death on her Facebook post. But now she is claiming that she didn’t have the whole story saying: “Never again will I do something so irrational.”

The year that in October, Josh surprised her with a romantic proposal on her 25th birthday on October 17 and she said yes, according to People. He also presented her with a brand new ring. Therefore, today. the couple is reunited happily.

She is a Mother of Three Youngster

Yes, the MTV star is a proud mom of three adorable children. On September 12, 2011, she and her partner Mckee gave birth to their firstborn son, Gannon Dewayne McKee, via c-section. Gannon was born before their wedding.

The McKees again welcomed another bundle of joy or daughter Jaxie Taylor McKee on February 7, 2014. She was also born with c-section emergency. Their third born or youngest son Broncs Weston was also born via emergency c-section on August 15, 2016.

Total Amount Of Net Worth- $1 Million

Since starting her career, Mackenzie has started working as a reality TV personality which has added to her achievements. Her total net value is estimated to be over $1 Million as of June 2020. Her whole fortune came from her jobs as a cast member of the three reality TV series named 16 and Pregnant, Teen Mom, and Teen Mom 3.

For her salary, McKee reportdely received $20,000 per episode of MTV's first spin-off of 16 and Pregnant's show, The Teen Mom. Kailyn Lowry is another cast member of 16 and Pregnant with a net value of $25 thousand. So far, she is a car enthusiast and has brought Ford Explorer car recently.