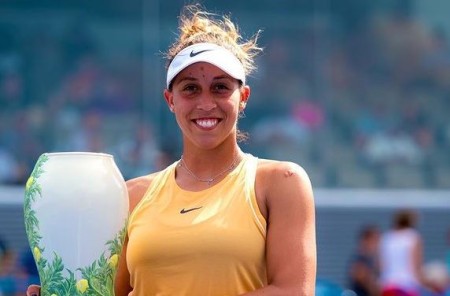 One of the top 25 professional tennis players, Madison Keys has been among the best players since early 2015. She is the winner of five WTA tournaments and her major title came at a premier 5 event in the 2019 Cincinnati Open. Madison is the first American to reach the top 10 of the WTA rankings in 2016.

Keys was born on February 17, 1995, in Rock Island, Illinois, the United States. Her father, Rick, an African-American is an attorney, while, her mother, Christine is also an attorney. Madison belongs to bi-racial ethnicity. She has three siblings; an older sister named, Sydney and two younger sisters named, Montana and Hunter.

The 25-year-old, Madison Keys is in a romantic relationship with her boyfriend, Bjorn Fratangelo. Like Keys, her lover is also a professional tennis player. Additionally, Fratangelo is the only second American tennis player to win the boys' singles title at the 2011 French Open.

So, how and when Madison began dating Fratangelo? Well, the news of their relationship first surfaced online in 2017. They have been dating since July 2017 as Keys confirmed the relationship via her social media. However, the pair is yet to be married and they also haven't shared their future plans. Unlike them, Serena Williams and her husband, Alexis Ohanian enjoy a perfect married life.

Both Madison and Bjorn share a passion for food and they are conscious about what they eat. While they are not practicing or not working out, the couple prepares exotic dishes together. They travel and enjoys late night romantic dinner as well.

The 27-year-old, Bjorn Fratangelo began playing tennis at an early age. His coach is his father, Mario. In April 2016, Bjorn won the 2016 French Open Wild Card Challenge. At the 2011 French Open, Bjorn won the boys' singles title. Afterward, he became the only second American to win the event.

Fratangelo has won eleven titles throughout his tennis career. His other hobby includes photography and interior design. We can say that Bjorn and his girlfriend, Madison is among the most loves tennis couples.

The 1.78m tall, Madison has an impressive net worth of $8 million as per celebritynetworth. She has won over $12.6 million in total prize money from her professional career. On her 14th birthday, Keys turned pro and debuted at the Ponte Vedra Beach Championships a few months later.

In 2019, Madison finished no.13 in the fifth Top 20 season and won two WTA titles. In 2020, she reached the final at the Brisbane International. In the world of professional women's tennis, Maria Sharapova, Serena, and Venus Williams are the highest-earning players.

Besides, Keys is sponsored by Nike who provides her with clothes and shoes. She is the first American ambassador for the French water company, Evian. She is the partner of the contact lens brand, Acuvue, and has endorsed Orangetheory Fitness.

Keys idolizes Roger Federer and admires the Williams sisters. She wants to remember for her work and actively participates in charitable causes.