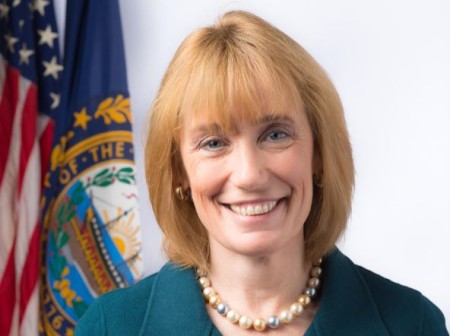 Over the years, there has been an uprising increase in women's participation in politics. Likewise, Maggie Hassan is a renowned personality who is currently serving as the junior United States Senator from New Hampshire. She is serving with Jeanne Shaheen, another former governor. Maggie and Shaheen are the only two women to be elected as both governor and senator in American history.

Margaret Coldwell Wood Hassan was born on February 27, 1958, in Boston, Massachusetts, the United States. Her last name is an Irish surname. She is 62 years old as of 2020. Hassan, a Democrat, is a former Vice-Chair of the Democratic Governors Association. She has also served as a superdelegate at the Democratic National Convention.

Hassan's father, Robert Coldwell Wood, was a political scientist who served as the secretary of Housing and Urban Development. Also, he served as the president of the University of Massachusetts from 1970-1977. Meanwhile, Hassan's mother, Margaret Byers, was a housewife. Her parents married on March 22, 1952.

Maggie has a brother named, Frank Wood and a sister named Frances Wood. Her brother, Frank, is a Tony award-winning actor, who currently serves on the faculty of HB Studio. He has appeared in multiple films, television, and theater plays, including Joker, Gold, Law & Order, etc.

Talking about her education, Maggie earned a Bachelor's degree from Brown University. Similarly, she received a Juris Doctor degree from the Northeastern University School of Law.

Maggie is a married woman, and she has been married to her husband, Thomas Hassan. The two first met while studying at Brown University. At the time, Tom was working as an assistant dean of freshmen and undergraduate admissions officer.

After dating for a while, the couple married in 1983. During that time, Thomas was getting his doctorate from Harvard. Maggie and her husband, Tom, has been married for nearly four decades as of 2020. They have a son named Ben and a daughter named Maggie.

Their oldest child, Ben, has cerebral palsy, and he can't walk and speak. Maggie advocated for her son's rights to get an education at public school.

Thomas Hassan served as principal of The Phillips Exeter Academy from 2009-2015. An accomplished educator, he was named as one of the Elite Private School Power Players in 2011. Since 2016, he has been working as the president of the School Year Abroad.

The current junior U.S senator, Maggie Hassan, has a net worth of $3.5 million as of 2020. As per Politico, her assets are reported between $2.15 million and $4.66 million. Similarly, in 2017, Maggie was said to have a net worth of $9 million. She earns an annual salary of over $174,000 as a junior senator of New Hampshire. Martha McSally, a junior senator from Arizona, also has a decent fortune.

Further, Maggie served as the 81st governor, where her income per year was over $126,327. She and senior senator, Jeanne Shaheen are the only two women in American history elected as both governor and a U.S senator.