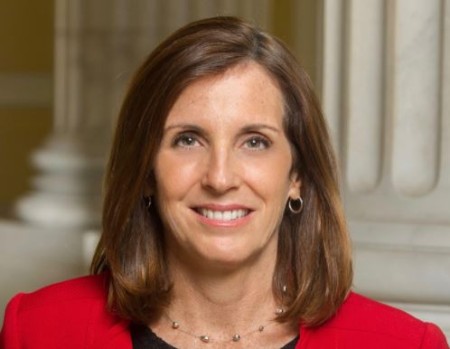 Martha McSally is an American politician who began serving as the junior U.S Senator for Arizona since 2019. Previously, she served as the U.S. Representative for Arizona's 2nd congressional district from 2015-2019. She served 22 years in the United States Air Force from 1988-2010 and was the first U.S. woman to fly in combat. A former colonel, McSally was also the first woman to command a fighter squadron.

Martha Elizabeth McSally was born on March 22, 1966, in Warwick, Rhode Island, the U.S. The youngest of five chilren born to parents, Bernard (father) and Eleanor (mother), Martha attended St. Mary Academy. Her father was a lawyer while her mother was a reading specialist. Martha has a B.S in Biology from U.S Air Force Academy and a Master's in public policy from Harvard University's John F. Kennedy School of Government.

McSally was briefly married to a fellow U.S. Air Force Officer named Donald F. Henry. The two remained as a married couple from 1997-1999 until the state of Arizona annulled their marriage. They had no children.

It is said that McSally and her ex-husband, Henry had a sham marriage, which they got annulled instead of divorcing. As per rumors, the couple married just to make it easier for McSally to get a promotion.

Since her first failed marriage, Martha has never been married. She currently resides in Tuscon, Arizona. It is not known whether the 54-year-old politician had been in relationships in the past.

McSally completed her undergraduate Pilot training at Williams Air Force Base east of Phoenix. She was assigned to an operational A-10 squadron that deployed to Kuwait in 1995.

During this time, she flew combat patrol over Iraq, enforcing the no-fly zone over Southern Iraq. Afterward, she became the first American woman fighter pilot to fly in combat and to command a fighter squadron.

In 2004, McSally was deployed to Afghanistan, where her squadron won the David C. Shilling Award presented by the Air Force Association. She retired from the U.S. Air Force on May 6, 2010.

During a hearing on Sexual Assault and Misconduct in the Military on March 6, 2019, McSally informed her colleagues that a superior officer had raped her while serving in the Air Force.

McSally revealed that she was raped while serving in the military!

Previously in an interview with The Wall Street Journal in 2018, McSally revealed that her track and field coach pressured her into a sexual relationship. She didn't tell the incident to friends and families until ten years after graduation. Another combat veteran and current junior senator of Iowa, Joni Ernst is also a sexual assault survivor.

In the U.S Senate

On January 12, 2018, McSally announced her candidacy for the U.S Senate. She lost narrowly to Democratic nominee, Kyrsten Sinema, who became Arizona's first female senator. McSally and Sinema are jointly serving in the senate office.

In November 2020, a special election will be held to determine if McSally will serve the last two years of the term. She will face astronaut and engineer Mark Kelly for the Class 3 Senate term.

The junior U.S senator for Arizona, Miss, Martha McSally has a net worth of $1.5 million as of 2020. She receives an annual salary of over $155,000 and earns an extra $100,000 as expenses and bonuses. Martha has now become an author as well as she has written a boom called Dare To Fly.