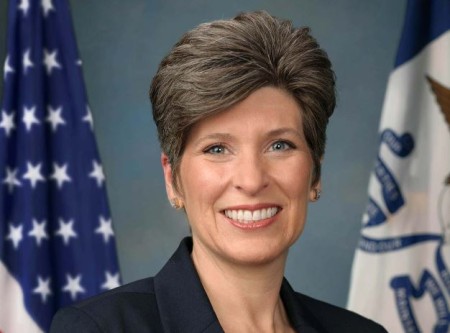 Joni Ernst is an American politician and first female combat veteran to serve as the junior United States Senator for Iowa since 2015. Previously, she worked in the Iowa State Senate from 2011-2014. A Republican, Ernst served for 22 years in the Iowa Army National Guard from 1993-2015.

Joni Kay Ernst was born on July 1, 1970, in Red Oak, Iowa, the U.S to parents, Marilyn and Richard Culver. She is 50 years old as of 2020. A valedictorian of her high school, Ernst later earned a Bachelor's degree in psychology from Iowa State University. Afterward, she received a Master of Public Administration degree from Columbia State University.

Joni was previously married to her husband, Gail Ernst. As per Gail's Facebook page, the couple married on July 24, 1993. Their wedding ceremony took place in Savannah, Georgia. Like Joni, her ex-husband Gail is also a former military man. He served in the Army for 28 years, including becoming a Ranger and Drill Sergeant.

Joni joined the ROTC program at Iowa State University when she was 20 years old in 1990. It was here when she met her husband. Joni and Gail share one daughter named Libby Ernst. She is following the footsteps of her parents and began college at the U.S Military Academy at West Point.

In August 2018, Joni announced that she and her husband were getting a divorce. As per Joni's court filings, Gail was a cruel husband who abused her mentally and physically. The pair had been married for over 25 years. So, what was the reason behind their separation?

On the occasion of their 25th wedding anniversary, Joni claimed to have found an email related to Gail and his old-time girlfriend. Further, in her divorce statements, Joni wrote that he had at least three different affairs during their marriage.

On the other hand, Gail denied Ernst's claims, and instead, he accused her of cheating on him with a soldier while she served in the National Guard in the early 2000s. Their divorce was finalized in 2019.

Was Gail jealous of his wife's success?

In her divorce affidavit, Joni wrote: "In the summer of 2016, I was interviewed by Candidate Trump to be vice president of the United States. I turned Candidate Trump down, knowing it wasn’t the right thing for me or my family… [Gail] hated any successes I had and would belittle me and get angry any time I achieved a goal.”

Senator, Joni Ernst says she is a survivor of domestic violence!

Gal replied that he always tried to become a good husband and a father. He retired from the Army in 2001 and joined the U.S Bank in Iowa as a Branch Manager in 2002. Before marrying Joni, he was previously married to a woman named, Ingrid Nesbit with whom he shares two daughters.

The first female military woman elected to the United States Senate, Miss Joni Ernst, has a net worth of $15 million as of 2020. As the junior U.S senator for Iowa, Ernst received an annual salary of over $174,000. Additionally, she earns around $100,000 in extra income, including expenses and bonuses.

Since 2014, Joni has been receiving $3.12 million in financial support from the National Rifle Association (NRA). She opposes expanding gun control and has an "A" rating from the NRA. Unlike Ernst, Kelly Loeffler, a junior U.S senator from Georgia, has a huge net worth of $500 million.