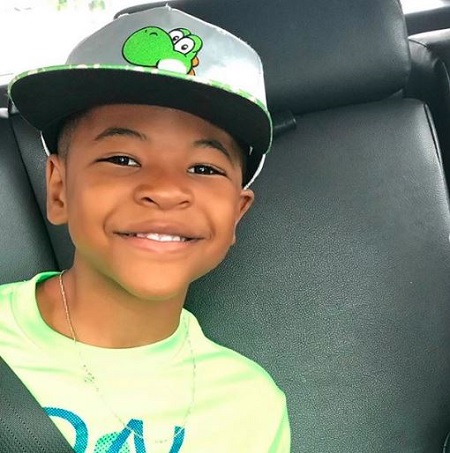 Some kids are lucky enough to get a lavish lifestyle because of their high-profile parents. In a similar context, Mason Evin Smith who born with the silver spoon on his mouth. He is famously known as the second-born son of American singer, Ne-Yo, and his actress ex-Fiance, Monyetta Shaw.

The celebrity infant was born on October 9, 2011, in Atlanta, Georgia. At the time of his birth, he weighed 6 pounds and was 10 ounces long. Further Mason has one biological big sister Madilyn Grace Smith who was born on November 12, 2010. He holds American citizenship and is of African-American ethnicity.

His Parents Called Off Their Engagement

Yes, Evin Smith's dad, Ne-Yo, aged 40, and mom, Monyetta, aged 40 were in a long-term relationship before the stuff broke off. They first met in a concert by Jamie Foxx in Lousiana 's hometown of Shaw.

The rapper received his future girlfriend, Shaw's phone number through a mutual friend. They then started dating. Only a brief period of falling in love, they became engaged and was excited to go get married.

But Shaw and Smith called off their engagement by the summer of 2012. The reason behind their break up was Ne-Yo did not feel he should be in a monogamous relationship. Thus, they were together almost for four years.

During their relationship, they have two children together, Madilyn and Mason. Today despite their parting, they still possess a great connection and are communicating very well. Also, they are raising their kids together.

Mason is a Half Brother of Roman and Shaffer

Yes, you read that correctly. The 9 years old Mason has two younger half brothers from his dad's side. They are Roman Alexander-Raj Smith, born on March 15, 2016, and Shaffer Chimere Smith, Jr. born on born on June 14, 2018.

His father, Shaffer Chimere Smith was remarried his now estranged wife, Crystal Renay, 34, after his parents seperation. They walked down the wedding aisle on February 20, 2016, after a short time of love romance. Their big day took place in Rancho Palos Verdes, California, United States.

That same year, they welcomed their son Shaffer and later their youngest one Roman was born. But recently in Feb. 2020, the married couple announced that they have gone their separate ways due to their personal issues. They were married for almost 4 years.

Meanwhile, Mason's mother Shaw got engaged to new fiance nicknamed Health. She declared her engagement news through her Instagram post on June 28, 2020, Sunday. In the post, she showed off her big diamond engagement ring on her finger.

The Total Amount Net Worth

Mason who is just 8 years old is still young to start his own career. Thus, for now, he's using her parent's assets being the son of millionaires. When it comes to his mother, Shaw's worth, it is around $2 million as of early 2020. She has made her wealth from her career as an actress and reality TV personality.

Her acting credits are Welcome Home, Soul Men, Video Girl, and Roscoe Jenkins. On the other hand, his dad, Ne-Yo has a remarkable worth of $9 million. He has earned his wealth from his prolific singing, songwriting, acting career.

His greatest hits albums include Because of You, Year of the Gentleman, R.E.D., Libra Scale, and among others.