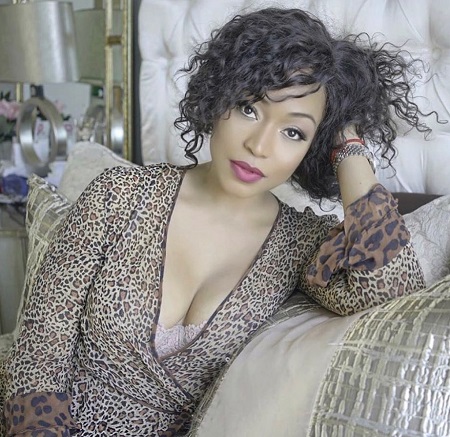 She was born on 31 May 1980 in Greenwood, Louisiana, the USA. She holds American and is of African-American ethnicity. For her education, she graduated from Louisiana Tech  University with a Bachelor of Science Degree in Psychology.

Yes, you have read that correctly. Ne-Yo ex-fiance, Shaw, now 40 years, has got new fiance in her life and excited for the wedding as well as.

Monyetta, the mother of two, recently announced her engagement news through her Instagram post on June 28, 2020, Sunday. She posted along with hers a snap of the mysterious man's hand, showing off her big diamond engagement ring on her finger.

While her new lover identity is still unknown until now, her one friend named him Health when commenting on her post. In reality, because of their low key love life, there is no information when they started dating eachother.

Meanwhile, the 5 feet 6 inches tall actress frequently posts pictures with her husband to be. On July 2, she posted the photo with him and captioned it: " It’s almost like I knew this man in another life”, from the ‘99 & the 2000".

Who Was Monyetta Shaw Engaged to?

Monyetta Shaw was previously in a lovely relationship with a famous record producer, Ne-Yo, 40. They were together almost for four years. The ex-pair first met in a concert by Jamie Foxx in Lousiana 's hometown of Shaw.

The rapper received her number through a mutual friend and they started dating soon afterward. Only a brief period of falling in love, they became engaged and was excited to go down the aisle together.

But Shaw and Smith called off their engagement by the summer of 2012. The reason behind their break up was Ne-Yo did not feel he should be in a monogamous relationship. During their relationship, they have two children together. On November 12, 2010, they welcomed their first child or baby girl Madilyn Grace Smith.

After the birth, Ne-Yo said that time he has been in love before but this feels like nothing we've ever felt... like I'm in love for the first time.  Then again, they gave birth to a boy, Mason Evan Smith, on October 9, 2011. Today despite their separation, they still have a good relationship and are communicating very well. Also, they are co-parenting their kids happy.

Since the separation, the R&B singer-songwriter, 40, went to marry his now estranged wife, Crystal Renay on February 20, 2016. But recently, their marital relationship came to an end in February 2020. They share two sons named Shaffer Chimere Smith, Jr., and Roman Alexander-Raj Smith.

Monyetta Shaw's total net worth is roughly $2 million as of 2020. Her source of income is her own career as an actress and reality television personality. Her credits are Welcome Home, Soul Men, Video Girl, and Roscoe Jenkins.

Also, Shaw starred on VH1's reality TV show, Atlanta Exes. Thus, her salary might fall in around $57140 per year. Similarly, as an author, she has published three children books named Bigger Than Me Paperback, Keep It Classy, and The Adventures of Maddie.

Ne-Yo - Because Of You (Official Music Video)

Whereas her ex-fiance, Shaffer Chimere Smith who is better known by his stage name Ne-Yo, has an impressive worth of $9 million. He has acquired his wealth from his thriving singing, songwriting, acting career. Over his career, Ne-Yo has released a greatest hits album like Because of You, Year of the Gentleman, R.E.D., Libra Scale, etc.