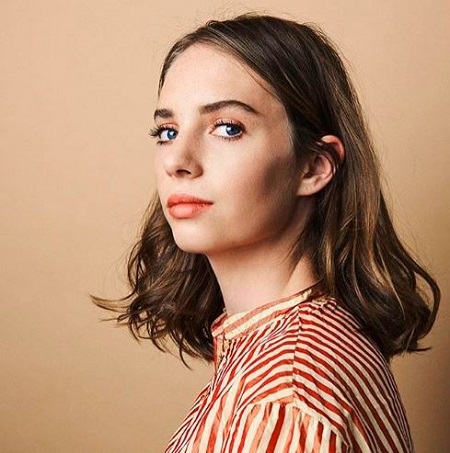 Maya Hawke is an American actress and model who made her first screen debut with 2017 BBC TV series Little Women, where she played the character of Jo March. Apart from her own career, she is also famous as being the daughter of a superstar, Uma Thurman and Ethan Hawke.

She was born on 8 July 1998 in New York, New York, the United States as Maya Ray Thurman Hawke. She has a younger biological brother Levon Roan Thurman-Hawke, born on 15 January 2002. Also, she has two half-sisters, Clementine Jane Hawke, 12, and Indiana Hawke, 9, by her dad's second marriage with wife, Ryan Shawhughes. Further, she has one half-sister, Luna Thurman-Busson by her mother's past relation with Arpad Busson.

Initially, Maya studied at a private school Saint Ann's School in Brooklyn, New York. Then she enrolled at the Royal Academy of Dramatic Arts in London. Afterwards, Hawke studied Stella Adler Studio of Acting in New York. Then she attended the art school Juilliard for one year. Apart, she was diagnosed with dyslexia in her early days.

Does Actress, Maya Hawke Has Boyfriend?

Beautiful actress of twenty-two years, Maya has already shown strong chemistry of friendship with co-star Joe Keery on screen. But they're not a couple, so is she actually dating someone behind the screen?

Recently on July 22, 2020, she was seen spotted together along with actor Tom Sturridge, 34 in the Hamptons over the weekend. But after several appearances together, the new pair seemed to confirm their growing relationship. On Sunday, August 3, they walked arm in arm and kissed during a New York City outing.

On the other hand, The Boat That Rocked's star co-parenting an eight years old daughter, Marlowe Ottoline Layng Sturridge with ex-fiance Sienna Miller. They were together from 2011 until 2015. Recently in September 2020,  Miller called off her engagement to her new beau, Lucas Zwirner, 29.

Their relationship rumours sparkled when the actress shared a cosy snap with Gus on her IG wall on February 19, 2019, with love emoji. Certainly, the post made a convincing case for a potential partnership between the two. On the other hand, Wenner posted on his Instagram account a photo of two on June 23. And the photograph was taken in Amagansett, New York.

Although neither of them officially spoke of their potential relationship, their IG posts indicate a romantic link could exist between them. But the two haven't deleted each other pictures from their account until now. "I had a beautiful, romantic relationship that lasted one year and it only came to an end," Hawke once said sources.

Since beginning her career in 2017, Maya has successfully accumulated a huge amount of fortune in a short period of time. As of early 2020, she has a whopping net worth of $3 Million. She credits most of her worth to her thriving career of working as an actress and model.

In 2019, Hawke has starred as Flower Child in Quentin Tarantino's comedy-drama film, Once Upon a Time in Hollywood. And the film has received good praise from critics and has grossed $374 million worldwide against the estimated budget of $90–96 million. Her other film credits are Ladyword, and Human Capital.

Added to that, she featured on Netflix's series, Stranger Things, premiered on July 15, 2016. She played the main role of Robin Buckley alongside Shannon Purser, Millie Bobby Brown, and others. As a model, she has made appearances on Vogue, Calvin Klein, All Saints, and few others.

Meanwhile, her dad, Ethan shares $55 million net value while her mother, Uma has $45 million worth now.