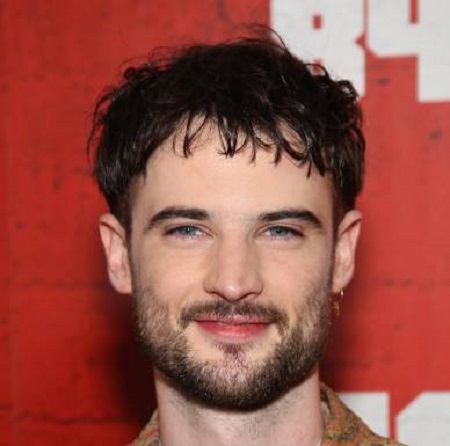 Tom Sturridge is a famous English actor who gained international fame after starring in films such as Being Julia, Like Minds, and The Boat That Rocked. Further, he was cast in the Walter Salles's film adaptation On the Road as Carlo Marx in 2012. Asides movies, he has played the main character of Jake in Starz's drama television series, Sweetbitter from 2018 until 2019.

He was born on 21 December 1985 in Lambeth, London, the United Kingdom as Thomas Sidney Jerome Sturridge. He is the firstborn kid of director, Charles Sturridge and actress, Phoebe Nicholls. He has two younger siblings, sister Matilda Sturridge, an actress and brother Arthur Sturridge, an actor. He is a graduate of Winchester College. So far, he holds English citizenship and is of white ethnicity.

Yes, Tom, 34, is currently rumoured to be dating a popular actress and model, Maya Hawke, aged 22. She is the eldest daughter of Hollywood superstar, Uma Thurman and Ethan Hawke.

Recently on July 22, 2020, Tuesday, the pair were spotted first together in the Hamptons over the weekend. They seemed to be going on a beach trip as they walked side by side. But after several appearances together, the new pair seemed to confirm their growing relationship.

On Sunday, August 3, The Boat That Rocked's star and The Stranger Things' star walked arm in arm and kissed during a New York City outing. Well, Maya made her first screen debut with 2017 BBC TV series Little Women, where she played the character of Jo March.

He is a Father of One Baby Girl

Yes, you have read that correctly. Sturridge, the 1.78 m tall, was previously engaged to American-British actress, Sienna Miller, aged 38. The two started dating in March 2011 and became engaged on January 2012.

During their dating period, the couple gave birth together to their daughter Marlowe Ottoline Layng Sturridge on 7 July 2012. But three years later, the pair announced that they were no longer together in July 2015. Despite their spilt, the ex-couple are happily co-pareting their 8 years old daughter Marlowe.

After that, Miller, 38, started dating her new beau, Lucas Zwirner, 29. But recently in September 2020, they called off her engagement.

The British actor Sturridge undoubtedly acquires a suitable amount of money from his acting work. As of early 2020, her net worth is around $3 Million. His significant way of earning is his professional performing job. Well, he is active in the film industry for 24 years.

Tom made his first acting debut with the TV adaptation of Gulliver's Travels in 1996. To date, he has starred in many hits movies such as The Boat That Rocked, On the Road, Vanity Fair, Far from the Madding Crowd, FairyTale: A True Story, etc. Thus, he might be received the payroll over $60,000 in a year.

On the other hand, his mother, Phoebe Nicholls has a worth $3 Million, which she has earned from acting gigs. Whereas his dad, Phoebe Nicholls' exact net value is still under review.