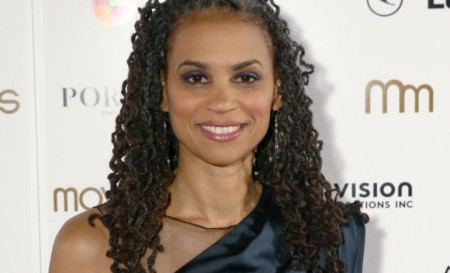 Maya Wiley is an American civil rights activist and racial justice advocate. She is currently the university professor at The New School and the Henry Cohen Professor of Urban Policy and Management. Maya is also the co-chair of the school diversity working group or the New York City Department of Education.

Previously, Maya served as the chair of the NYC Civilian Complaint Review Board. She has also appeared as a legal analyst for NBC News and MSNBC. Recently, the activist announced that she would run for Mayor of New York City in the November 2021 elections.

The 56-year-old, Maya Wiley is married to her husband, Harlan Mandel who has been serving as the chief executive officer of Media Development Investment Fund since 2011. They have been married for over two decades as of now.

The couple is blessed with two daughters named Naja Wiley Mandel, and Kai Wiley Mandel. Maya and her husband has kept their daughters out of the spotlight. Hence, there is not much information about them. Currently, the family resides in Brooklyn, New York City.

It is not known Wiley and Mandel married but they first met in 1986. They attended Columbia University School of Law from 1986 to 1989. Hence, their romance could have blossomed during that time.

Harlan Mandel is a well-known attorney and investment manager. He practised law in the offices of New York and Los Angeles and has expertise in international litigation, intellectual property, and new media law. Mandel is the member of the Global Future Council, board chairman of Grupa Eurozet, one of the board directors at Malaysiakini, and many more.

The former NYC CCRB board chair, Maya Wiley has a net worth of $1 million as of 2020. Further, she earns around $83,453 per year from her multiple positions. Mostly known for activism, Wiley has amassed a decent fortune. However, she is known for giving back to the community as well. Unlike Wiley, the mother-daughter activist duo, Gloria Allred and Lisa Bloom has a huge net worth.

Wiley has previously served as the counsel to the Mayor of New York City, Bill de Blasio and earned a six-digit figure salary. Wiley worked for NBC News and MSNBC as a legal analyst for two years and her annual income was over $56,432. Similarly, her husband, Harlan might have collected a huge wealth as an attorney.

In October 2020, Wiley announced her candidacy to succeed New York City Mayor Bill de Blasio in 2021. She would be the city's first woman mayor and second black mayor if elected. She has a long history of working in several high-profile positions.

Wiley worked in the civil division of the United States Attorney Office for the Southern District of New York. She worked for the NAACP Legal Defense and Educational Fund and then was appointed a counsel to the mayor.

Wiley was born on January 2, 1964, in Washington, D.C., the United States. She was born to father, George Wiley, a civil rights leader and academic. Likewise, her mother, Wretha Frances, who was white also worked on progressive issues.

Wiley grew up with a brother and a sister. On August 9, 1973, her father fell off while on a boat on the Chesapeake Bay and three days later his body was found on the shore of the beach. Talking about education, Maya received her Bachelor of Arts degree in psychology from Dartmouth College. Likewise, she earned a Juris Doctor degree from Columbia Law School.