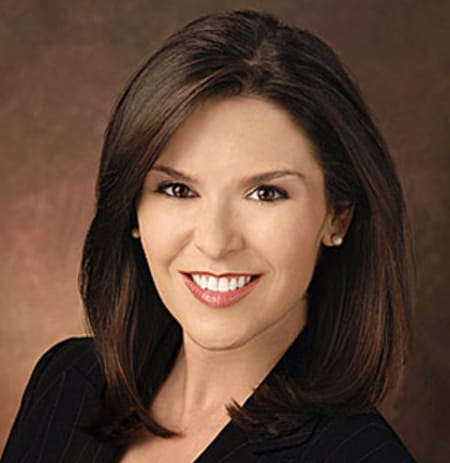 Meg Oliver, an award-winning Network TV Correspondent and Anchor, is now working for New York-based CBS News. She reports with Norah O'Donnell and CBSN for all the CBS News programs, including CBS This morning, the 24/7 digital network, and the CBS Evening News.

Megan Elisabeth Oliver was born on December 15, 1970, in Birmingham, Michigan, USA. She is American born and belongs to white ethnic background. Meg graduated from Marian High School and studied at the University of Montanna with a BA degree in Journalism in 1991.

The CBS correspondent, Oliver, now leads a very flourishing and fortunate marital relationship with her long term life partner, John Basinger, for over 17 years. By profession, John is a corporate lawyer.

Meg and her husband got married on October 18, 2002, at an intimate ceremony. But not much known about their wedding days on the media. Similarly, in the early 2000s, the couple had their first meeting through the Montana connection.

For now, the happy duo is living a blissful life together with no sign of conflicts and separation. The beautiful woman never fails to show her love for John as she takes her time out for romantic dates.

Recently scrolling her Instagram page, Meg posted a photo of their 17th-anniversary celebration on October 18, 2019. Besides this, the couple has three beautiful dogs.

The long term married couple are parents of three children, two sons, and a daughter. On August 29, 2006, they welcomed their first daughter Maria Basinger and on May 9, 2008, their second child or eldest son Tommy Basinger was born.

Oliver is a veteran reporter with more than two decades of experience covering and anchoring. She has written on a large variety of breaking news reports around the country over the past two years. She has thus undeniably made a huge fortune out of her work.

While the exact amount of net worth of Meg is not known anywhere, it could be more than $1 Million. Similarly, she reportedly made between $106,562 to $131,041, which is CBS correspondent's average salary in the US. Similarly, CBS' anchors Janet Shamlian and Nikki Battiste also earn a decent amount.

Oliver started her broadcasting career on KCFW-TV in Kalispell, Montana, as an anchor-reporter. She first joined CBS News in 2006 as the Up to the Minute morning reporter and as The Early Show correspondent. At present, she is reporting from home due to the COVID-19 pandemic.

In 2009, Meg left CBS and worked as a reporter at ABC News. She has collaborated with David Muir on Good Morning America Weekend Edition and ABC World News. She returned on CBS News in 2015.