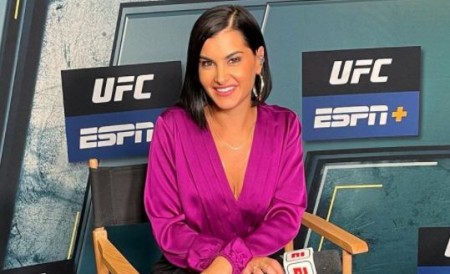 Megan Olivi is one of the most recognizable sports reporters best known as the wife of MMA fighter, Joseph Benavidez. She hosts Fox Sports 1 television magazine show, UFC Ultimate Insider. Megan's spouse is currently ranked #2 on the UFC flyweight rankings. He competes in the Flyweight division for the UFC.

The 34-year-old, sports reporter Megan Olivi is a married woman. Her husband is Joseph Benavidez, a professional mixed martial artist. So, how did the couple meet? When did they get married?

Well, Megan and Joseph first met at an event in Las Vegas in 2009. At the time, Olivi was sent to cover MMA fights in Nevada, while, Benavidez was then signed by US-based World Extreme Cagefighting.

For Joseph, it took him five years to get out of the friend zone as he popped the question to Megan in 2014. For their engagement, Joseph gave Olivi a platinum round cut diamond ring. The couple then married on October 9, 2015. Further, their wedding ceremony took place in Las Vegas.

Joseph and his wife has been married for over five years as of December 2020. They have a pet dog named, Benny. However, the couple doesn't share any kids.

Joseph Benavidez about his Wife

The 36-year-old, Joseph Benavidez is an American professional MMA fighter. He was born in Texas and belongs to Mexican heritage. Before his MMA career, Joseph struggled with alcohol and drug abuse.

Benavidez has been fighting since 2006. He is expected to fight Askar Askarov on March 6, 2021, at UFC 259. Now talking about his relationship with Olivi, Joseph never misses any chance showering his wife with praise and love.

The UFC reporter, Megan Olivi has an estimated net worth of $1 million as of 2021. She is a mixed martial art news/events reporter. Also, Olivi currently serves as a host and producer for “The Exchange with Megan Olivi." Do you know she was both a preliminary and final telecast judge at the 2017 Miss Universe Pageant?

The average salary for a sports reporter ranges somewhere between $10,000 (minimum) to $100,000 (maximum). Meanwhile, ring announcer such as Joe Rogan has a huge net worth of $40 million. Talking about Olivi's spouse, Joseph has a net worth of $2.5 million.

Olivi began her career with an internship at The Fox News Channel. She worked as Megyn Kelly's assistant during the 2008 presidential election. In February 2013, she became Fox News San Diego correspondent. At the time, she hosts and produces a weekly magazine show called, Padres POV.

Further, Olivi works as the in-studio desk host for several events on FS1 throughout the year. Besides, she serves as a reporter for NFL on FOX like Kristina Pink.