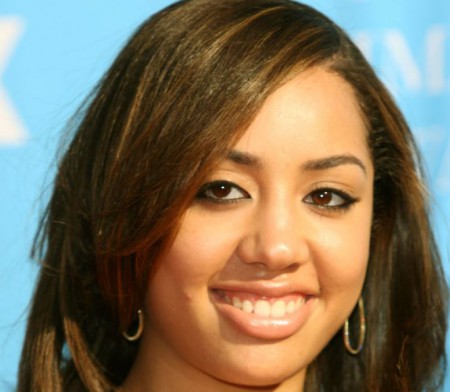 American actress, Melanie Hervey came to limelight after playing the role of a student in the historical romantic drama movie, The Courage to Love. She is also well known for her work as a costume intern in Jeff Garlin's comedy film, Dealin' with Idiots starring Steve Agee, and Gina Gershon.

Hervey was born as Melanie Lynne Hervey on 30th June 1987 in Los Angeles, California. Born into an African-American family, she holds American citizenship. Now, what about her personal life? Is she married or dating anyone? Who's the lucky person to stole her heart? Find out more in detail about Hervey's personal life in the following sections.

The 32-year-old actress, Melanie, is currently single and prefers to keep her personal life far close to herself. Despite being a daughter of famous peoples, she maintains a secretive life.

The celebrity kid further is focusing on her upcoming projects and currently concentrates on her fitness works as a yoga instructor to her practitioners. It seems like she's also achieving her dreams through her amazing works.

Nevertheless, their marriage didn't work and later filed for divorce in mid-1987. Finally, they separated in late 1987.

Her Mother (Vanessa)'s Other Marital Affairs

Melanie's lovely mom, Williams was married to a former NBA basketball player, Rick Fox, who played for Boston Celtics and Los Angeles Lakers. The two united as husband and wife on 26 September 1999, in a ceremony where their friends and family relatives gave blessings for their happy life.

Unfortunately, their marriage did not last for long. So, they separated in August 2004 after six-years of married life and finalized their divorce in 2005.

Upon their divorce, Williams met Jim Skrip, a businessman from Buffalo, New York, while traveling on a cruise in the Nile River in Egypt. They later get introduced and started dating for a while.

The duo later got married on 4th July 2015, at St. Stanislaus Catholic Church in Buffalo, New York. After their first marriage, they again tied the knot on 30th May 2016 in a Catholic Church located in Chappaqua, New York, which was the best day of their life. Since their wedding, they're happy residing together but haven't share kids till the date.

The Dealin' with Idiots custom intern, Hervey is the oldest sister out of three siblings, Jillian Hervey,Devin Hervey, and Sasha Fox (her half-sister and daughter of Rick and Vanessa). Furthermore, her second sister, Jillian (born on 19th June 1989), is a mesmerizing singer who's currently performing with her duo group, Lion Babe, with Lucas Goodman.

Hervey's half-sister, Sasha (born on 1st May 2000), is an award-winning actress and filmmaker who came to limelight after portraying Crystal Robertson in the TV show, Justice for All with Talent Judge, Cristina Perez in 2012.

Melanie Hervey has a net worth of $100 Thousand as of 2019. Similarly, she earns a substantial amount from her profession. In the United States, an actress/actor makes $56,502 annually, reported by Salary.

Hervey further worked in Kari Skogland's historical romantic drama movie; The Courage to Love, which gained positive reviews and garnered 6.3 out of 10. Similarly, some other actors like David La Haye, Cynda Williams, and Diahann Caroll, among others.

Yoga instructor, Hervey, is an avid animal lover who is fond of caring for her Majestic Tree Hound pet dog whom she often called BFF. She loves to take photos of her dog and shares it on Instagram.

The star moreover posted a picture after celebrating the day of Christmas with her pet dog on 26th December 2018. She also shared a beautiful photo while practicing yoga with her dog on 15th July 2019. As of now, a Majestic Tree Hound dog costs around $300 to $400.