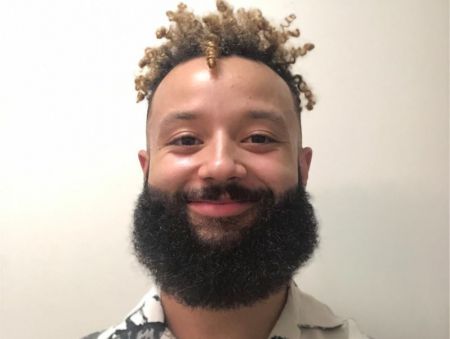 American fashion designer, Devin Hervey is profoundly working as the purchase order coordinator for the largest men and boys clothing and accessory fashion company, Maxfield Enterprises Inc. He is also a prolific freelance designer who designs apparel, footwear, package design, and more using Adobe Creative Suite. Other than that, he acted as a young student in the historical romantic drama movie, The Courage to Love.

Hervey was born on 14th April 1993 in New York City, New York, to Vanessa L. Williams and Ramon Hervey II. He further holds an American nationality, and his ethnicity is mixed. So, is he married or single? Take a glimpse of Devin's personal life in the following sections.

Maxfield purchasing coordinator, Devin, is reportedly single as of now. Despite born in a show business family, Hervey is not much expressive about his personal life or any other details related to him and lives a low profile life.

Devin additionally is busy concentrating on his work so that he can be a successful person like his parents. He is currently following his dream in the field of fashion, which might be the reason why he isn't married until now.

Devin's parents, Vanessa L. Williams and Ramon Hervey II, were recognized as one of the beautiful couples in the entertainment industry. The duo united as husband and wife at St. Francis Xavier Catholic Church in Manhattan, New York City, NY, on 2nd January 1987.

The couple further stayed in a conjugal life for more than nine years, but later, they filed for divorce, citing irreconcilable differences in 1997. The court confirmed their separation in late-1997.

Hervey's beautiful mother, Williams married to her second husband, Rick Fox on 26th September 1999. Her spouse is a former NBA basketball player for Boston Celtics, as well as the Los Angeles Lakers.

The pair's marriage didn't last long, which led them to file for divorce in August 2004. Their divorce was finalized in the court in early 2005.

Upon the divorce, Vanessa met an American entrepreneur, Jim Skrip, who's a native of New York. Later, they started dating and shortly got engaged.

On 4th July 2015, the two walked down the aisle at St. Stanislaus Catholic Church in Buffalo, New York. The duo lives a happy life but yet share children.

Devin Hervey has three lovely sisters, Melanie Hervey, Jillian Hervey, and a half-sister Sasha Fox (daughter of Vanessa and Rick). His older sister, Melanie (born on 30th June 1987) is a prominent actress and costume designer, who rose to fame after portraying the role of a student in the historical romantic drama movie, The Courage to Love.

Her second sister, Jillian (born on 19th June 1989), is a prize-winning singer who's currently singing duo for the band, Lion Babe, with Lucas Goodman. Similarly, his half-sister, Sasha, is a filmmaker who's a movie, One Fine Christmas, which is going to be released in late-2019.

Devin Hervey has an impressive net value of $600 Thousand as of 2019. He makes a subsequent income from his profession. Similarly, he also earns decent money as a freelance designer. In the United States, a freelance designer makes $49,084, reported by Glassdoor.

Regarding Hervey's mother, Williams, she has a whopping fortune of $28 Million and also resides in a luxurious accommodation located in Chappaqua, New York. As of now, the price of her house is $2.8 Million, which consists of four bedrooms, three and a half bathrooms on 2,452 square feet.

Experienced Gained As A Fashion Designer

The 26-year-old designer, Devin, started his career as an intern for the Los Angeles-based premium streetwears brand, DOPE, in March 2012. Later, he was promoted as a co-presenter for S.L.A.T.E. Magic Tradeshow in August 2012.

After working for over a year, Hervey began to work as a designer for the collection of DOPE and Devin Christian Collaboration in May 2013. He also worked as a graphic designer for the group, Lion Babe's Wonder Woman Single Cover Art in May 2015.

The fashion designer also enrolled as an interim assistant inventory manager for the boutique, Peri. A from July and August 2018. Since 2016, he is profoundly working as a freelance designer and a purchase order coordinator for Maxfield Enterprises.

If You're Fond of Reading, Then Click Married Celeb!!! To Explore More Amusing Biographies & Articles