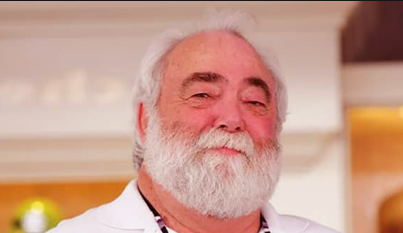 Michael Groover, a harbor pilot, is best known as the husband of Paula Deen, a celebrity chef, and cooking show host. The couple has been married since 2004 and has spent almost 16 years as husband and wife.

Micheal was born on 1956 and has spent most of his life in Savana. He is also the winner of the world-famous Hemingway Look-Alike Contest in Florida on July 21, 2018.

Micheal Groover has a blissful marital life with famous chef Paula Deen. The pair exchanged their wedding vows in 2004 and are together.

Their wedding ceremony took place at Bethesda Academy in Savannah, Georgia. The pair celebrated their union in a true southern style.

Before Paula, Micheal might have married, but so far, there is no much report regarding his previous affairs and married life. But we do know that he got a daughter whose name Michelle Groover.

How Their Love Story Began?

At the time of their first encounter, the love birds used to lives in their hometown Savannah. Micheal and Paula were neighbors. Interestingly, when Paula Deen's dogs walked into the yard of Groover, the two get to know each other.

After several meetings, the duo fell in love with each other. In 2012, the married couple held a picnic with Southern cuisines such as pickled okra sandwiches and crab-stuffed shrimp.

So far, Deen and Groover have spent the past 15 years taking on life's ups and downs together. Keep Scrolling to know Paula Previous Marital Life.

Nine Years Of Age Gap Between Groover And Deen

People usually think the pair is the same age, or even Deen is a little younger than Micheal. Infact, Groover was born in 1956, making him nine years younger than her wife, Deen.

The age gap appears to have never affected the couple. It doesn't impact the pair in the least, and in reality, owing to this age gap, Groover maybe even more appropriate for Deen, because she still seemed youthful and energetic no matter what her age.

Groover's current wife, Paula, was previously married when she was just 18 years old. Her first husband's name is Jimmy Deen. Deen's first marriage lasted for 24 years and had two children together, Jamie and Bobby.

Their union was not a success and got divorced in 1989. After her divorce, Paula lived the next 15 years as a single woman until she met her current husband.

Micheal Considered To Be A Great Stepdad

One of the greatest obstacles about being married to someone who was married before is seeking a way to bring both families together. As per internet tabloids, Micheal seems to be successful as a stepdad.

In 2017, Denn's son shared a happy birthday post to Micheal by stating, "Happy birthday, Michael Groover!". In the following post, they also said,

"We're glad to have you as a part of our family because you always make Mom so happy."

It seems like Paula sons have no problem calling Micheal as a stepdad. Besides the family relationship, Micheal has written a book to describe his life ups and downs. Just scroll down to know.

Rumors of Paula Deen and Michael Groover made a sensation as fans figure out they were headed for divorce. During that time, Groover's suspected affair with a sexy middle-age brunette. A few years back, the fire was further ignited when Deen gave Groover alone the deed to one of their houses.

Furthermore, the couple did not get seperated and settle their disputes with mutual understanding. And in one of her interviews, she said: "He has always been so supportive to take his things and put them aside to be with me."

Micheal Groover as an Author

After spending five years of a romantic marriage, in 2009, Micheal dedicated a book to his wife, which is entitled "My Delicious Life with Paula Deen."

His book contains tales about his life before he met Deen. He has explained his experiences as a tugboat owner and what it was like becoming a single father raising his children in the American South where he grew up too.

Despite Micheal's assets and wealth, most of the fortune came from his wife, who is a owner of pet food chains. She is also a widely renowned chief who has featured on many T.V shows. Therefore Micheal's present wife Paula might be earning a six-digit figure from her career just like Lauren Cook.

The couple currently resides in Savannah, where the duo owns a property that costs around $1.3 million. Their property spread in 5,646 sqft, which consists of the three-bedroom, three-bathroom.

For more updates, stay tuned and connected to Marriedceleb.